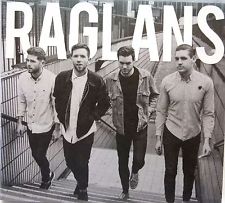 This could be an extremely short review. Raglans is a band with music that puts a smile on my face. Not unlike that first ray of sun that actually makes a difference, announcing the end of winter. These lads know where they have to dip their instruments in to come up with some fine music. Whoooaaaaa's fly around in all the right places as does an additional instrument like a trumpet to underscore the fun.

Raglans make the sort of music that ranges between (Brit)pop-punk-rock not over-emphasising any of the three, thus creating a perfect match in the exact middle of the triangle, spelling one word only: party! A tip over to one corner of the triangle is compensated immediately with a tip over to one of the others. A balance is kept at all times. At the same time the negative side of Raglans is mentioned: it all is very well-levelled. No major ups nor downs. It is a downside I can live with quite easily. Just see me smiling at the moment of writing. The Irish side shines through with the addition of a mandolin to the sound, like in 'Not Now'. The ooh-oohs are all over the place and again the song has a fun vocal melody. Another straight winner.

Raglans is a band from Ireland and is around since 2011. What Stephen Kelly, Conn O' Ruanaidh, Rhos Horan and Dan O'Shaughnessy present us is their first album. In Ireland this resulted in chart success and quite rightly so. Raglans is a fun album. The band knows exactly what to do to make a whole pub shout along while swinging a pint of Guinness high up in the air. I don't doubt it also has the quality to do the same with larger venues, where other drinks are swung around in plastic containers.

Perhaps the music could have been one step more dangerous as a song like 'Fake Blood' colours between the lines very neatly. The ooooh does not compensate all here. When the Irish blood crawls where only it can go, the songs receive a Celtic flavour. 'Before Night' is a fine example of that. Listening to Raglans in general I'm getting the idea that Dropkick Murphies can punk-up some modern Irish classic for a change. Most songs of this band qualify quite nicely for this.

Raglans is an album for everyone who likes his music on the not to wild but 100% fun party side. Up beat with some nice harmony singing. If Raglans manages to step this effort up one notch in the future, it'll be irresistible.

But what is a Raglan? Apparently it has something to do with a sowing technique and sleeves and jackets. Fascinating.

You can listen to 'Digging Holes' here: