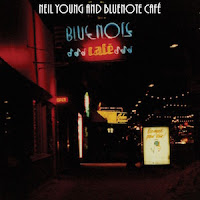 It was in the town of Mudgee in New South Wales that I bought my first Neil Young LP. 'Like A Hurricane' was played on the only pop music broadcast on the local radio between 10 and 12 at night. 2MG even repeated whole shows every once in a while, so I got to know which songs were played before they came on. 'American Stars 'n' Bars' was and is a strange hybrid of an album, but contained Young's best electric song to date. A year later back home in NL I found that Neil Young does what he wants to. 'Comes A Time' was so much different and what to think of 'Rust Never Sleeps' another year later?

In the 1980s things even became more weird. Neil Young was sued by his record company, DGC, for not being Neil Young. He really tried out everything he wanted to try out. One of those albums was released in 1988 as Neil Young and the Blue Notes called 'This Note's For You'. A big band album, which I liked at the time, but haven't played for years. Now there is a live registration from the time, with Neil Young with all this brass copper around him. It is a total winner. Glorious and every note is for me (and you of course).

The sound is huge, suave rock and roll and bluesy. Neil Young emulates a rock and roll orchestra in the grandest of words and ways. 'Welcome To The Big Room' starts in this huge, blown up vain. A rock and roll guitar, the drums pounding on the backbeat, creating this feeling of laziness, over which the horns blow in a full and luscious force. Somewhere in all that violence a warm Hammond is hiding and as an icing on the rock and roll cake Young plays his solos. Fiery, rough and loud. It all reminds me of the blues of T-Bone Walker. That too neat version of the blues to my taste, trying to tie in with the Frank Sinatra sound. With that enormous distinction: the grit and dirt that The Blue Notes put into their playing and the solos of Mr. Young himself of course.

Armand may sing in a derogatory way about the blues, when played in this way, I can live with it all day and all night long. The intro of 'Don't Take Away Your Love From Me' is one of those that could continue kind of for ever. The horns truly weep once Young starts singing. The blues is deep and heartfelt. People are most afraid of what they fear and that is going on in this song. Unless she is already standing in the door with a suitcase in her hand of course.

Bluenote Cafe captures shows this band played in 1987 and 1988, so is not truly a live show captured, but an amalgam. If they put the arguably best rendition of each song on the double album then they made the right decision. If anything this album is so totally alive and some of the songs are just smoking. I saw Neil Young play with Crazy Horse late in May 1987 in Rotterdam following up on the half succeeded 'Life' album. There was nothing there that prepared me for what I'm hearing now. Neil Young lives in all his incarnations, but he seems to be just this little extra alive here. His heart is really, really into what is happening here and the band does all these little extras as well. Crazy Horse is present here, snowed under all the horns. 'Ten Men Working' indeed.

When the tempo and rock level goes up as in 'Life In The City', the horns keep up. Neil plays this dirty lick and the trumpets and saxes just go of. The bass pumps on relentlessly. Together the song comes alive and is a dangerous as snake.

The fun ends with an almost 20 minutes rendition of 'Tonight's The Night'. The roof simply came off in New York.

Two albums long I'm glued to my speakers, so much fun is coming out of them. From out of nowhere a second Neil Young album presented itself for my shortlist of 2015. Bluenote cafe is, as far as I'm concerned, the best Young released in his performance series so far. A surprise, as I wasn't even aware that he had toured with a band like this. If you're a Neil Young fan, Bluenote Cafe is an album you are not to miss. One of the highlights of his career.

Although I had promised myself never to go to a Neil Young show again, somewhere around 1999 or 2001, I just bought some tickets for the show in Ziggo Dome coming July. More on Neil then, but for those who can't wait: 1 January 2016........ Tune in again then.

You can listen to 'Crime and the City' here: