Sun Leads Me On. Half Moon Run 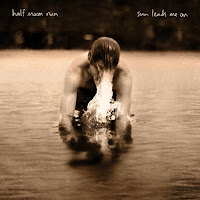 What is it that I am looking at? Every time I look at this cover, I have to wonder. Of course it something with water coming off his head, but because of the sepia colours and the fierce light it could be anything when I look at the picture at a glance.

Half Moon Run received a favourable review on this blog in 2013 with its first album 'Dark Eyes'. Late in 2015 I am finally getting around Sun Leads Me On. It took me a while to really get into the album. After that beautiful album opener 'Warmest Regards', which reminds me of everything from the flute in Canned Heat's 'Going Up The Country' to George Harrison's 'Here Comes The Sun', I had a hard time to find my way. 'I Can't Figure Out What's Going On' moves into The Decemberists territory and I kind of lost my own way. What I did not do was give up on the album. Sometimes it takes more time to build a relationship with an album. Experience learns that often these albums are the truly lasting relationships with music. It is growing as I finally got myself to writing.

Half Moon Run is a Canadian four piece band that excels in lavish harmonies. It starts with the lead singing of Devon Portielje (guitar and percussion), followed by Conner Molander (guitar and keyboard),  Dylan Phillips (drums and keyboard) and Isaac Symonds (percussions, mandolin, keyboard and guitar). The members seem to play the instrument a song calls for and a lot of switching is suggested. That singing though is an important feature of Half Moon Run.

It is a safe bet to place Half Moon Run in the new folk group of bands that all broke since 2010. At the same time there is no hey ho in sight and that scores an extra point with me. Listening into Sun Leads Me On shows how versatile Half Moon Run is. The band has a few sides that all fight for attention. There is the soft, melancholic one that wants to play this beautiful ballads, there is the folk side and there is this rock beast that lies underneath everything just waiting to wake up and explode in to a song, upsetting the whole apple cart. This band knows how to explode and change the mood and how to take it all down to an acoustic guitar and voice again. All in taste and aiming for the sort of beauty that needs a second and third acquaintance to notice. Nothing is obvious on Sun Leads Me On. Again, over all this is the singing, that holds the same quality as The Shins or further down the time line, CSN were capable of. Half Moon Run is able to conjure up this sort of vocal majesty.

Take the title song. In this ballad the singing is superb, while the guitars play this subtle game, while at the same time sound threatening. Is there something going to happen when they speed up the number of notes played? In the end it is resignation. The sun may stay the same, the "I" in the song never comes out into the full light and remains in the shadows while he's changing. An intriguing song 'Sun Leads Me On' is. It's beautiful on the inside but never happy.

This is a musical trick that Half Moon Run is good at. There is more promise than is delivered in several songs. That hint at sunlight that we never reach. 'It Works Itself Out' comes very close. The lead voice shoots up, a nice synth line comes through as does the harmony. But do I reach full light? No, when the song finally brings me to the end of the dark, shady forest, a storm has broken loose, keeping the light from me, bringing more shade.

Half Moon Run conjures up all this imagery inside me while I'm listening to Sun Leads Me On and affects me in a different way than most songs do. They touch me in my imagination centre also. Now it isn't hard for me to get myself into that mood, but then I'm in the lead. Half Moon Run is in the lead here. Its music just takes the shortcut.

'Everbody Wants' shows again how good the band plays with dynamics. From ever so soft to full out and back to nearly nothing. Followed right away by an almost classical piano recital in 'Throes'. A short piece of music that is just put in between it all, before we go into an up tempo folk tune with a driving acoustic guitar and a harmonica. The early Dylan is a reference here.

In the end there may be too many sounds on Sun Leads Me On for the average listener. As far as I'm concerned the both of us are quite pleasantly getting along and growing. Half Moon Run has several faces and wears them well. Nearing the end, the band with the somewhat eerie ballad 'The Debt' reaches another highlight and an explosion in sound, before it all ends with the first single of this album 'Trust', that adds some dancey elements to the sound. Probably a run for the charts. The contrast with the album opener.'Warmest Regards' good not be larger though. The contrast is enormous. Fun album may be the wrong word, but fun I have. There is simply so much to discover. Album and cover are in total balance.

You can listen to 'Turn Your Love' here: