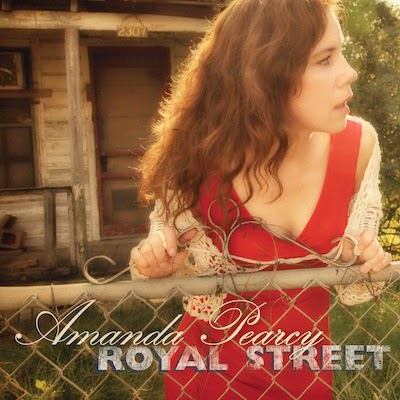 Recently I was surprised by a great show at Q-Bus Leiden that Amanda Pearcy gave together with her sidekick Matt Giles. As I wrote, mileage in life just dripped from her voice and oozed out of her ongs. Live Pearcy was completely convincing. Erwin Zijleman, who regularly features in this blog, wrote highly of Royal Street. So I guess it's my turn. How does Royal Street hold up at home?

That one is so easy to answer. Great, just great! Strangely enough I had listened to Royal Street on Spotify the day before the Q-Bus show, at least I think I did now that I have listened again, and thought it not much. Switched it off after the third song, but went to the show anyway, with very little expectations. That made the surprise the bigger. Two ways too: live and on record.

Hearing a singer-songwriter play alone or together with a lead guitarist (or any other (lead) instrument) always raises the question what happens on the record. Sometimes that is a real bummer. Those records on which not much remains from the intense solo versions in the hands of the producer who just adds and adds instruments and emotions are left out, forgotten. There's no worry of that on Royal Street, named after a street in the centre of New Orleans. Of course the songs are neater, but I have the strong impression that the songs get the treatment that they deserve and most importantly, enhances them with something extra, all meant to make the voice of Amanda Pearcy shine.

Writing about this album starts with her voice, as it is not an average voice. It has a rough edge, but contains sweetness and compassion as well, with an ability to change to a deeper register. A fascinating voice that is extremely pleasant to listen to. Even in songs which are too country to my taste, Amanda Pearcy's voice makes them interesting to listen to.

Royal Street is at heart a country album, what we call alt-americana today. From country, there are outings into folk, roots and even traditional blues. Many sorts of music come together in the deep south of the U.S. and blend well in Austin, Texas, where Mexico is fairly close too. These elements make Royal Street a varied album. Like on the album of another favourite U.S. singer-songwriter of mine, Beth Wimmer's 'Ghosts and men', the songs on Royal Street get a special treatment, that make them stand out among each other and in general as well. From a lone violin in the title song 'Royal Street' or an accordion in 'The story of my heart' something extra is happening. Producer Tim Lorsch clearly put his stamp on Royal Street, but never takes anything away from Amanda Pearcy.

As I already wrote, Royal Street is a varied album. The Tex-Mex-mariachi-country mix in 'Barking dogs' works very well. 'Royal Street' is a beautiful ballad. 'Better on my own' a bluesy song with some nice slide work, that is accompanying. No antics here. 'Better on my own' doesn't need it. It's beautiful as it is. Near the end Amanda Pearcy covers The Rolling Stones' 'No expectations'. (Side B of my first Stones single 'Street fighting man'.) It is in this version that it becomes clear how good a country blues the song is. I always thought it a good Stones song, Amanda Pearcy made it something else: A good song. And she has her own version as well. 'A thousand tender recollections' is her combination of 'No expectations' and 'Forever young'. Great organ and harmonies as well.

Taking Royal Street all in, I do not see any reason why Amanda Pearcy can not be as big as Lucinda Williams. In my humble opinion her album is more consistent in quality than any of Williams' albums. Live I was impressed, on record Amanda Pearcy has convinced me as well. From ballads, to country songs and from folk to roots rock, the great, great 'Come on sugar', Amanda Pearcy is like a fish in water in all genres. A star ought to be born sometime soon. Does the cover show just that? Her bandwagon coming down the street?

You can listen to 'Royal Street' here.

P.S. Amanda Pearcy reached out to us and tipped this video where she plays with Matt Giles: