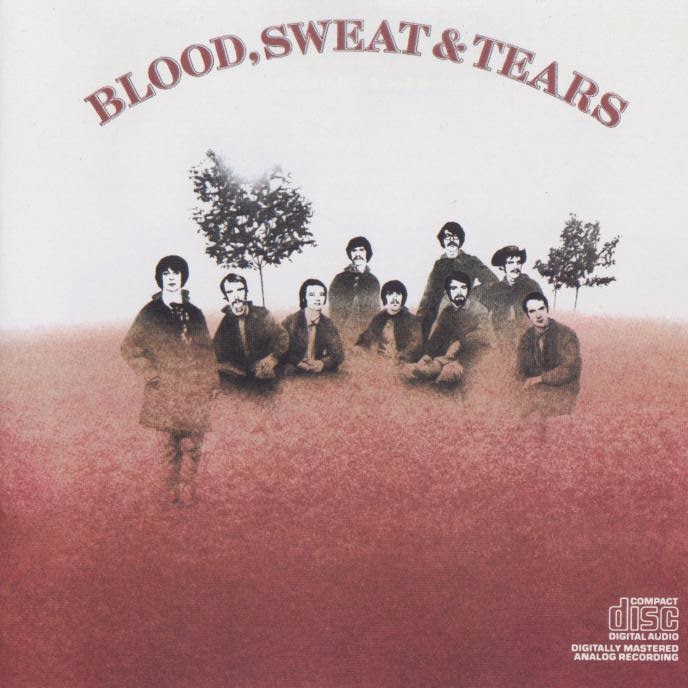 As regular followers are aware of by now, we are running a special series of albums released in 1968-1969. This is the fourth instalment, following Spooky Tooth, Chicago Transit Authority and The Nice.

Blood, Sweat & Tears is an album that I did know before I started listening specifically to these old records for this blog. I have the LP, bought somewhere around 1980 and a friend in my teen years had a copy of Blood, Sweat & Tears 3 (1970). Blood, Sweat & Tears scored two (minor) hitsingles in NL in 1969 from this album. First 'You made me so very happy', followed by what I consider to be it's staple song: 'Spinning wheel'. As I never "grew" into this album and have discarded it many years ago, I thought to give it a second chance in 2014. Especially after Chicago Transit Authority surprised me so much.

BS&T started in 1967 and with a three years' hiatus in the early 80s is around till today. Ex-members run into the dozens and no one playing on this record is around today. The band is another product of the late 60s, a musical time in which anything was possible. Musically it is close to Chicago Transit Authority (or the other way around as BS&T released it's first two record before CTA). Blood, Sweat & Tears was released in December 1968 and musically shoots off in many directions. Certainly it is more focussed than CTA's first, double, album, but still. Where are albums nowadays that blend (modern) classical music, jazz, blues, Sinatra and Holiday with rock in this way? BS&T was a nine piece band and already a different band compared to the first album, 'Child is father to the man' (1968) in four positions. Horns are a significant part of its sound. As is singer David Clayton-Thomas who had joined the band in 1968. His rough sounding voice gives BS&T an enormous extra, a kick in the shins, that makes several songs come alive instantly. There is a second comparison with Chicago Transit Authority: producer James William Guercio worked on both albums, more or less simultaneously.

So what do I think of Blood, Sweat & Tears in 2014? I have to say that this re-introduction is not a negative one. It is not as powerful as my introduction to CTA. That album sort of blew me off my socks. For that BS&T plays to neat and without surprises (and I knew the album before). Also, Blood, Sweat & Tears is an album mostly filled with cover songs. Guitar player and lead vocalist on his own song, Steve Katz wrote 'Sometimes in winter' and Clayton-Thomas is responsible for BS&T's most famous song 'Spinning wheel'. There is a jam attributed to the band, but that has two famous songs worked into it, Cream's 'Sunshine of your love' and Willie Dixon's 'Spoonful'. 'Blues-Part II' is a long, classically sort of organ solo, before the horns kick in......to introduce a bass solo and then a drum solo. As I wrote, anything goes on albums in 1969.

Blood, Sweat & Tears starts and ends with 'Variations on a theme'. An adaptation of French modern classical pianist Eric Satie. Next there is a cover version of Traffic's 'Smiling phases'. It is here that the world is exposed to the voice of David Clayton-Thomas for the first time. To the credit of BS&T they have created a version of the song that is nearly unrecognisable. It rocks, is up-tempo and the horns really go wild. In the mid-section there is a very funky organ part and piano solo. 'Smiling phases' is transformed from this very serious, introverted song, into a 60s dance song and very well done as well. The already mentioned 'Sometimes in winter' is a bit of a comedown after this funky rock outing. It takes a lot of recalibrating, but after I've done that, it is easy to discover the beauty of this song. 'Winter in America' of Doug Ashdown certainly owes something to this song. Dick Halligan's flute really contributes to this jazzy ballad, that has more to do with singers from my dad's days than mine.

David Clayton-Thomas takes over vocals duties in the rocking 'More and more'. Again a powerful track, although he tries to emulate Otis Redding and Wilson Pickett a bit too much. Forcing a little bit, but the emotions are on parade. The horns, all four of them shine too. 'And when I die', a Laura Nyro cover, is another song that just takes off in this trippy directions. Strange rhythms, strange rhythm changes, weird sounds and reincarnation. (Not to forget the hee-haw.) Not my favourite, but certainly fun. 'God bless the child' is a Billie Holiday song, another jazzy outing, in which Clayton-Thomas really tries to sing. A song in which drummer Billy Colomby gets to show his chops. Fills and rolls all over the place and some catchy accents. I've heard other covers of this song, never the original, and BS&T does a great job here.

On the original side two the two hits come by. First 'Spinning wheel' It is not that I find this song extremely good. It never made my top 100, when I made these sort of lists as a teenager long ago, and still would not. No, I've always been intrigued, even as a kid. All these strange things happened in it. The mysterious stops, the loud horns, the rough voice, the rhythm changes. I do not think I had ever heard anything like it as a 9 year old. 'Spinning wheel' has not lost anything of its attraction in the past 45 years. It has the same sort of effect on me in 2014. Listening in awe to all the things going on. And a lot is going on. From the jazzy trumpet solo, to the long trombone slide or the funny end, everything is special about 'Spinning wheel'. On the album they congratulate themselves for all the right reasons at the end of the song. 'You made me so very happy' I did not like as a 9 year old. And this has not really changed either. It is too slick to my taste. BS&T keels over in the Sinatra trap and the somewhat rougher pre-chorus does not alter this. The bridge is o.k. though. However, also 'You made me so very happy' has more turns and twist in it, than any band would be allowed to record on one album in 2014. And that does make the song remarkable.

The re-introduction to Blood, Sweat & Tears agreed with me. It will never be a great favourite, but I will not mind giving the old record a spin once in a while. This album holds a few surprises and paved the way for jazz-rock bands that would sprout up soon in the 1970s all over the place. They were and are definitely not my thing. They were for the friend owing BS&T's #3 record though.

On the side this remark. The cover of Blood, Sweat & Tears looks a lot like a cover of The Band, that nowadays is often used to depict the band. Coincidence?