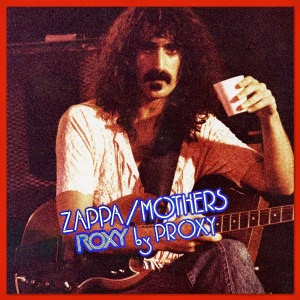 In 1979 I bought my first Frank Zappa album. Basically because of a fantastic cover: 'Sheik yerbouti'. An album with such a great cover, just had to be a great album. I didn't listen beyond 'I have been in you' and decided to take it home. From there I started buying backwards (mind, Zappa's first albums were not available until the introduction of the cd). One of that albums was a double LP called 'Roxy & elsewhere'. A live album released in 1974. There are some great songs on it, but it was not my favorite. So you can imagine that I was not overly enthusiastic when I read that there was an album out called Roxy by proxy. Same band, same time, same venue? Of course being a, nowadays somewhat dormant, Zappa fan, I did take a listen. And, boy, was I in for a surprise.

Frank Zappa passed away over 20 years ago. The Zappa estate is releasing albums at nearly such a strict pace as Zappa himself did when alive. Endlessly rehashing songs or releasing live shows from one period or another. Roxy by proxy is another one in that long list. Basically it was the last Zappa band that had the name The Mothers, with George Duke on keyboards and vocals and the fantastic Ruth Underwood on percussion, later Genisis tour drummer Chester Thomson on drums, next to Ralph Humphries. Yes, that's two drummers and a percussionist. Horns and woodwinds. A medium big band that is.

After a long introduction the first surprise is let loose on an unsuspecting audience. A totally jazzy, relaxed version of 'Inca roads'. George Duke takes his time, the band does too. The guitar solo is not there, nor is the weird, out there ending. This is, I think, the main difference with the original album release and with most Zappa shows I've seen, the mood is so relaxed on this recording. Zappa holds the reigns, but not too tightly and lets the band enjoy itself. The same goes for the bluesy 'Penguin in bondage'. This version is just this little more loose and relaxed. For the intro and most of 'Inca roads' it's like a jazz club orchestra is playing music in the late, late or should I say early?, hours. Totally at ease and jamming for itself and no one else. Even the strict typical Zappa eruptions are loser. The electric piano solo of George Duke is excellent, just like the trombone solo of Bruce Fowler.

Looking into the recording sessions, I found out that both albums were recorded in Los Angeles. The first, original one has songs on it from 8, 9 and 10 December 1973 (with overdubs and some songs from later on in 1974), the second, new, one has only recordings from 9 and 10 December. Is it possible that there is so much difference between evenings or even songs? It hardly seems credible. How many overdubs were put into the first Roxy? Does that have anything to do with it?

At the same time, Zappa has the band under a tight control. Complex arrangements are executed flawlessly, with several and very different instruments playing the exact same notes. Especially Ruth Underwood plays as if she has three brains or something. Not to forget as many hands as a Hindu goddess. Another thing I noticed while listening, is that many songs have elements in the instrumental parts that wound up in the album version of 'Inca roads' in 1975 on the album 'One size fits all'. ('Inca roads, for non-fans, was not on 'Roxy & elsewhere'.) Looked at superficially, too many songs of Zappa from the period sound like this, but on the other hand this is so good and so well played. What attracts me is that melodically most songs are alright and not just more or less complex rhythmic exercises. Even the guitar solos are good. Hear Zappa go off on 'RDNZL'. Way to go, Frank!

The different sides to Zappa come out on Roxy by proxy quite well. The cabaret/stand up comedian side of Zappa in some of the intros and the song 'Pinguin in bondage', as well as the avant garde/free jazz composer and director. The blues lover comes out every once in while. And finally of course Zappa the guitarist. The man who just loves playing endless solos. The good thing about Roxy by proxy is that everything seems to be in balance. Someone who was present at these shows, now over fourty years ago, must have had a great night.

Something to admire is that no matter how complex the music is, the musicians all play by heart. All the individual runs of notes. Improvising or playing note by note what Zappa composed? Who knows? All players have a great memory for music and have the ability to play under duress. Perhaps it is an explanation why most musicians left Zappa's band after a few years. Too demanding? Who knows, it's imaginable though.

What is good to realise, is that also Roxy by proxy is a construct of music played over two nights. Looking at the video below made me realise that nothing played there is on here, nor on the first Roxy. Both are constructed from the different songs and probably even versions available. This mix however is great and totally works for me. Food for Zappa fans Roxy by proxy certainly is.

You can watch a video from the shows here.