Seasons of your day. Mazzy Star 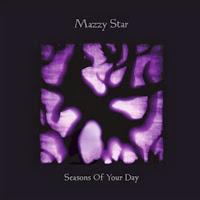 For several days we are looking back at bands from long ago. This time we turn our gaze to Mazzy Star that released a new album after seventeen years.

Music never is without surprises. That is one of the great joys of music and listening to something that I’ve never heard before. Somewhere in the 90s I heard an album by Mazzy Star, most likely 'Among my swan'. It was doom and gloom all around and, to my ears, just not much good. If I remember correctly it was also the last album of Mazzy Star, the last until quite recently that is. Why listen to it in the first place?, you might ask, having just read my first and last experience with the band. Well, that is because of that strange knack I have. Even if I did not like an album of a band I got into contact with, I will check out a next record any way. You never know. E.g. I’m glad I did with the latest Smith Westerns. It is even competing for my end of 2013 list, which I have to start making quite soon. And I’m glad I started listening, after quite some hesitation, to Seasons of your day.

Mazzy Star is the band around singer Hope Sandival and David Roback. It is around since 1989 and has made three records since then. Seasons of your day is number four. If anything this is a melancholy album. The mood is not cheery, but introspective and reflective. The acoustic guitar is the main stay of the sound, but there is a lot of blues in there too. And Drugstore. At first I thought the mid-90s band around Isabel Montero was resurrected as well. The emptiness of the sound, the spaciousness around Hope Sandival’s voice, everything spelled Drugstore. And I don’t care. (I may have been the only one in Nighttown that liked Drugstore, before the band’s memory was blasted away by one of the biggest talents in rock ever, Saint Jeff.) Season of your day is the more intriguing for it.

The slow, drawn out singing of Hope Sandival is just the right voice for this music. Listening to her on the headphone, she wraps herself around me, envelopes me with her seductive voice and draws me into the song, that slowly plays itself out. Clear sounding, up front, leading Mazzy Star, no matter what happens around her. Just an acoustic slide guitar (‘Does someone have your baby now’) of with a full band (‘I’ve gotta stop’), it is the voice that is leading and in control. It is not a sexy voice, far from. The seduction is in the slow, sensuous way of singing. That forces me to pay attention. It is at the same time a thin line. There are a few passages in ‘Common burn’ in which Sandival seems to lose control of her voice and at those, albeit sparing, moments, it is not a nice sound, moving towards a whine.

With ‘Common burn’ one of the most moody tracks of Seasons of your day is mentioned. The harmonica calling out like a ship lost out in the mist at sea. It as moments like this that Mazzy Star reminds of the acoustic side of the early 70s The Rolling Stones and a quieter Led Zeppelin. The rock side is totally missing here, which the two former certainly have. There is also a link to ‘Surrealistic pillow’ balladry. Title song ‘Seasons of your day’ certainly owns something to ‘Coming back to me’ or ‘Today’, Marty Balin’s great ballads from 1967. Mazzy Star also manages to give this song something extra, little bells, some strings.

With the smallest of effects one song is distinguished from another. ‘Lay myself down’ has this central tambourine mixed straight in the middle and a country flavor thanks to the pedal steel guitar in the background. Mazzy Star manages to define songs this way. Songs that are at best mid-tempo, uniform in style at their heart, but not in execution. It is this aspect, that I like best about ‘Season of your day’, together with Hope Sandival’s voice of course.

Another surprise as I already wrote. One that I’m very glad not to have missed.