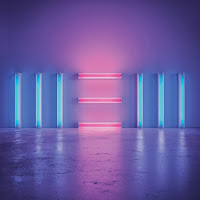 Over the past two weeks we have regularly looked at recent releases from several greats of past years. We started off with The Beatles, we end the series with New, Paul McCartney's latest record.

Paul McCartney is making records for over 50 years. Now in his early seventies, the ex-Beatle, ex-Wings and longtime solo recording artist is basically doing what he likes to do. Classical, choir, more experimental music under another name (The Firemen), jazz standards, anything is possible. And so it can seem that his solo career is on a slow burner, while in the meantime all sorts of output is presented to the world. If we measure things by a pop record under his own name we have to go back to 2007, six years, to ‘Memory almost full’, an album I did not even bother listening. Reading a review of ‘New’ something told me to listen to Macca’s latest album.

New starts with a sense of urgency. ‘Save us’ is a stark guitar driven song. Paul has found something to say on guitar and lets us know just that. Not all of New is this loud. ‘Early days’ is a slow song, not exactly a ballad, but an acoustic song such as Paul can write them. Title song 'New' is a melancholy pop song. Diversity is one of the treats/feats of New.


Paul McCartneys' voice has clearly aged. Not exactly making it to the high notes in a clear, easy way. To the contrary, but it gives 'Early days' and the theme authenticity. “I lived through those early days”, not unscathed, but healthy and well. It is commendable that McCartney does nothing to get away from these more difficult moments. There are high vocal spots all over New in which he goes to the limits of his current voice.

What surprises me, to be honest, is that I truly like New as a whole. It is 16 years ago that that happened to me with a Paul McCartney record. ‘Flaming pie’ was quite alright, before that I have to go back to 1988s ‘Flowers in the dirt’. And now after the totally rave show in Ahoy, early spring 2012 (click here for the review), Paul comes with another record that I like. At the same time it can’t compete in any way with ‘Band on the run’, Wings’ best album, but New easily surpasses many a record after ‘London town’.

New shows various sides of Paul McCartney. The crooner of old is there, always searching for a new ‘Yesterday’, but listening to ‘Appreciate’ I have to admit that Paul McCartney is able to incorporate very modern sounds into this darker song. A modern beat and strongly distorted guitars grace the melody in what turns out to be a very good song. The same goes for 'Alligator', 'Everybody out there' and 'Queenie eye', showing it is never too late to come up with a new sound.

New sounds just a tat more compact than McCartney usually does. This gives the album a sense of urgency and something contemporary. All without sounding strained to be modern. New is a Paul McCartney album, beyond doubt. Simply because of his voice. New is also a more modern record than he has made in decades. This is amendable, as nothing would have stopped him from presenting a bunch of songs that his last record buying fans would have expected to be presented. Instead they are challenged. Most people set in their ways, do not appreciate that, do they?

What is clearly lacking on New is an ultimate McCartney song. Whether it is a 'Paperback writer', a 'Helter skelter' or a 'Hi hi hi'. This is a level that he just doesn't reach any more. Is it fair to compare the McCartney of 2013 with his former self of 40 plus years ago? Of course it is, but on the other hand who in 2013 writes songs that are of the same consistent level of originality and quality as Paul and his colleagues wrote in the 1960s? Not very many. If I look at New from this point of view, this album has many a nice song on it. Pleasant, albeit not dangerous, but circa half of the songs on New possess an urgency that most pensionados do not have any more. New is an excellent addition to an oeuvre that is extremely distinguished.

You can listen to 'Queenie eye' here.