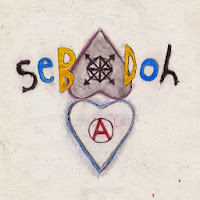 Another band that released a record after years of silence. So let's add it to the series anyway, despite closing with Paul McCartney's 'New' last Tuesday.

After Lou Barlow co-resurrected Dinosaur Jr. and came up with the excellent 'I bet on sky' (click here for the review), he resurrected his band Sebadoh in 2013. Leading to the very pleasant Defend yourself. 14 Years after 'The Sebadoh' a new album is released.

Exactly like Dinosaur Jr (with 'Farm') I missed every note before this album of Sebadoh. That allows me to listen to Defend yourself completely fresh, not being hindered in any way by preconceptions and comparisons to what went on before.

Sebadoh consists of Lou Barlow, Jason Loewenstein and Bob D'Amico on "performance and production". The first two being old compadres in Sebadoh, a word that is nonsensical, drummer D'Amico a very recent addition to the band. This three some only has two releases to its name, an EP and Defend yourself.

The album is at heart a rock horse. Guitars, a strong bass and loud drums drive most songs on Defend yourself. Neil Young is a clear reference in the way Barlow sings and in the guitars. There are side steps, like REM in 'Oxygen'. The sound is just a little harsher, certainly the bass is more fiery. The pop feel underneath the more direct sound is very REM, 'Monster' style. There is also some Pearl Jam in Sebadoh. In the way the songs shy away from flowing free and easy, challenging me to listen just a little harder, without resentment building up which usually happens to me listening to Pearl Jam (Eddie Vedders' wining voice). Buffalo Tom, The Lemonheads?, yes, they as well. Bands I haven't listened to for years, I realise.

Most songs remain within certain boundaries. 'Inquiries' does not. A too filled country rocker with guitar notes flying all over the place, but without a lot of coherence to it. Luckily there are not too many others of songs like these on Defend yourself. 'Final days' makes up for the slip. What a delicious rocker this song is. The difference between the band J. Mascis plays first guitar in and Lou Barlow second, also becomes very clear. 'Final days' may be guitar driven, but it is not a huge wall of guitars one has to wade through to get to a song. 'Final days' rocks, but every instrument and voice has its place in the mix. This makes for much more relaxed listening for me.

Lou Barlow's voice is not the most distinguished in rock, but the faintly hoarse sound is proficient enough to carry his songs and has a modest but pleasant ring to it. Towards the end of the album the pace goes down and it is clear enough that his voice suits these songs like a glove. 'Let it out' and 'Listen' stand out and prove that Sebadoh handles slower songs, ballads Sebadoh style?, quite well. Especially 'Listen' belongs to the finer songs on Defend yourself.

Looking at Defend yourself as whole, it is about three songs that keep the album from a perfect score. For the rest this indie rocker is a nice collection of songs that go off the beaten path and shows the gems that lie just beyond it. Sebadoh decided to make a comeback and quite rightly so. Perhaps all its previous records were better, I just don't know. It seems like it is time to find out.