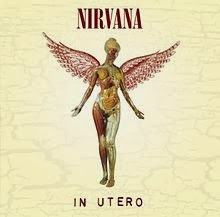 After a break e continue our short series. For a few we are going to look at recent releases from the great of past years. Let's take a look at In utero's re-release.

In utero, Nirvana’s third and last studio album, was released around the date my son was born. I got the album soon afterwards and set the sound system like I was used to set it, with the little fellow sleeping in his Maxicosy. Within a few days after his birth I knew for certain that there was nothing wrong with his ears, as after the first three ticks of Dave Grohl’s sticks the dissonant and loud guitar kicked in the little fellow had his arms and legs stretched out in four directions and let out an even louder yell. Welcome to the world of Nirvana. It worked as years later he was walking around with a Kurt Cobain t-shirt I bought for him during a holiday. I had learned a valuable lesson.

This year we celebrate the 20 years celebration of In utero’s release with a special luxury edition, with all the sort of extras that such albums bring. I’m not going into them, except note that the live album attached to it, shows how a dynamic and exiting band Nirvana was. What a loss it was that Kurt decided to join that infamous group, one that I feel more sorry for each year I grow older. Guys (and girls), you’re missing out on so much fun and growth! No, I want to go into In utero itself. How good is it 20 years down the line?

To set the stage. Yes, like almost everyone else I got on board of Nirvana with ‘Smells like teen spirit’. Like a lot of ‘Nevermind’ as well. Some I deemed too loud, but heard the quality of most songs, including the rage called ‘Territorial pissings’. Kurt Cobain thought ‘Nevermind’ too commercial, I think it probably scared the hell out of him. The insecure and angry kid from Aberdeen was still inside the worldwide pop idol and not bound to go away because of some success. Probably the opposite. Cobain decided to come up with a harder, rougher and less commercial album. He succeeded, as I did not really appreciate the album in 1993. I just did not think the songs as good as ‘Nevermind’s. Too loud, too edgy to listen to in a comfortable way. And then he came up with the MTV show, which was brilliant and then just shot himself.

Now it is 2013. I have played In utero through the years to remember all the songs, but the 20 year celebration is a reintroduction of sorts. And one of the pleasant kind. Twenty years down the line I can only say “wow”, what an album. In utero is a near perfect album. Holding several perfect popsongs, some under an ugly, nasty even, veneer, but brilliant popsongs non the same. Take ‘Frances Farmer will have her revenge on Seattle’ e.g. This song has the Nirvana/The Police dynamics, but has a brilliant chorus. Kurt singing, shouting, crying, reaching out in a desperate way with the last threads of his vocal chords hanging in shards at the back of his throat. The contrast with the subdued ‘Dumb’, cello and all, can not possibly be bigger. But also ‘Dumb’ is a beautiful song. Unfortunately the main message “just happy” did not apply to Kurt Cobain. These are just two examples of a set of songs that is close to too fantastic to be true.

What was the role of the two other members? They catered their front man mostly, I suppose. In Dave Grohl, Kurt Cobain had a young, great power drummer, that at the same time could totally hold back. And someone who could sing. (As well as write songs, which the world found out on the b-side of ‘Heart-shaped box’.) Krist Novoselic was his big bass player that played all the notes in between. Not very much getting attention nor asking for it, like most bass players. Still, together they made Nirvana what it was, were part of the sound that the world fell for. They were Nirvana together.

In 2013 Kurt Cobain would have been 46 years old. Unimaginable, as his young face is still looking at us from t-shirts and sweaters worn by youngsters that weren’t around when he was alive. An icon like Jim Morrison was for my generation in the 80s and early 90s. There is no telling where Nirvana or Cobain solo would be at now. I’m very sure that it would not be as big as ‘Nevermind’ made them. In utero saleswise already proved that. Like Pearl Jam never got over ‘10’. Nirvana could have had a career like Pearl Jam though, as a revered relic from the grunge days that still sells records and can play bigger shows and head line a festival every few years. We’ll never know, what I can say, is that with the demise of Kurt Cobain a more than averagely talent left us, who had more up his sleeve than we had the chance to find out. A waste of talent his suicide was, but an act of desperation we have to respect. Sad but true.

In utero remains a relic from a gone age. Next year we’ll be celebrating the 20th year release of the only album of that other lost icon of the 90, the one that drowned in a freak swimming incident. Two huge losses. So sad. The one question that will never be answered remaining is, what would Dave Grohl have done had Kurt lived? Foo Fighters or no Foo Fighters?