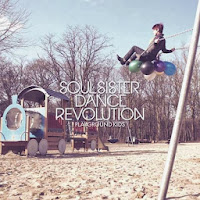 Three times Soul Sister Dance Revolution so far has featured on this blog. Recently live reporter HareD gave his view, that coincided with that of Wo.: SSDR is a band that holds its (play)ground on stage. (Click here and here.) Somehow in the past months I forgot to listen to the album the band released this year. An omission I'm about to make up on.

Playground kids is a clear cut rock album, well, at first it is. The further the album moves on the more different influences appear. Kasabian, i.e. dance infused rock, is a clear influence on several songs. Single 'Hold the line' and 'The ripper' both have the right rhythm and the ah-ah-ahs. There is some psychedelia hidden in there and one effort at scoring a Top 2000 for ever song: "Soldiers of love". The great sing-a-long at SSDR shows. Not all songs on Playground Kids are that easy to digest, but are memorable in their own way. Most songs are riff driven, hard edged, but to the point and always these features are functional to the song.

First track 'Baby gaselle' kicks off like crazy. Franz Ferdinand on steroids. 'Baby gaselle' is a statement, a letter of intent. This is who we are, so take it or leave it. I took the bait and although SSDR does not keep up the quality of Playground kids as high as 'Baby gaselle' for the whole 38 minutes, this song shows the potential of the band. Arctic Monkeys in its riffing days and Franz Ferdinand may set THE standard, but after them a song like 'Baby gaselle' is out there with the best of them in riff driven pop-rock land.

SSDR is a band from The Hague that is around since 2009 and consists of Thomas van der Want, vocals and guitar; Laszlo Barz, leadgitaar, backing vox; Michael Baumgarten, bassguitar; Camiel Meiresonne, keyboards, percussion and backing vox; Jelger Durieux, drums and backing vox, with Van der Want taking songwriting credits. There is something in the water in The Hague, as it seems to be claiming back its 60s moniker of rockcity of The Netherlands. SSDR is one of the exponents of this revival.

Playground kids is a varied album. Perhaps not so much in approach, but certainly in the way SSDR tries to blend rock, infused with dance influences with pure pop. Behind the stark approach with loud guitars, riffs, pumping bass and hard hitting drums, there is a pop feel that is on the look out for the right melody. A melody that is easy to remember, to whistle along to. On top of that the band knows how to create several melodies and harmonies within one song as well. A song is not just finished with the lyrics and chords in place. SSDR shows a keen ear for embellishing songs in ways that simply make them so much fun.

Playground kids is a debut album that deserves to be heard, to be appreciated and ought to be the stepping stone to more. A problem might be that a band like Kasabian doesn't do anything much in the Netherlands. There is a major advantage though. SSDR can play every stage big and small over here and conquer every soul sister and brother step by step. Soul Sister Dance Revolution managed to capture its live enthusiasm on tape and added what a studio can offer as well. This, together with the quality of the songs, makes Playground kids a very successful album. Compliments should go here to the producer, Di-Rect's Bas van Wageningen, as well, as he captured Soul Sister Dance Revolution in all its prowess.

And watching the 'Soldiers of love' video just now and hearing the song once again, I realise that this song is one of the best tracks to come out of The Netherlands in 2013, 2012, 2011, etc. Really Top 2000 material. How to get that into the minds of all those people set in their 'Bohemian rhapsody' ways since 1975? Let's start with spreading the news right here.