The Storm Before The Calm. Beauty In Chaos 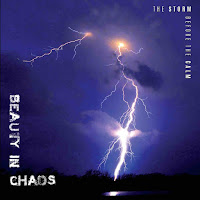 A beautiful album cover adorns the Beauty in Chaos album The Storm Before The Calm. Being in the middle of a real thunderstorm though is total chaos. I speak from experience on broken glass and devices and split through the middle trees. It can be worse and destroy a house I had heard only on the morning before havoc wreaked our house.

So it comes as a bit of a surprise to find Beauty in Chaos on average brings music that is restrained. There's always a lid on what the band does, in a beautiful, dead-heavy way. The music has touches of classic rock pulled through a the mid 80s Simple Minds blender. Deep, dark, powerful drumming, guitars with a mile or more delay on the sound. The singing comes in two flavours dark and darker in a post-grunge kind of way. Opening song 'The Outside' brings the, almost same-titled song by Staind to mind, without being the same. Not even closely.

So who is Beauty in Chaos and is there an explanation for this sound? It turns out to be more of a collaboration between the man who's brainchild or "curator mastermind", Beauty in Chaos is, guitarist Michael Ciravolo He hosts a score of other musicians and singers to make a song together. Formerly famous names like Robin Zander, Al Jourgensen and others have come by, but also artists that have been reviewed on these pages fairly recently, like UMMAGMA and Evi Vine. On this new album e.g. Wayne Hussey of The Mission fame can be found.

Ciravolo's fascination for rock and alternative music from the 80s shines through every pore of The Storm Before The Calm, a six song mini album following a full length debut from 2018 and a re-visioned version in 2019.

In 2020 the curated band project returns. Each song has a different singer and partly a different approach in sound. 'Almost Pure', the second song of the album, has a large synth sound lying over the song. Over and under that layer a host of guitars are played (and of course the deep drums and bass guitar taking care of the deep end). Those synths are straight 80s also of course. What sets the album somewhat apart is the effects and studio options that have become so much more sophisticated in the 30 plus years we have all moved on.

When the more balladry third song 'Temple Of Desire' proves to be made with taste once again, I somehow return to the word curated. I feel like I'm walking around at a musical exposition where only the very best artists or very best works of one artist hang. Ciravolo has picked out the best sounds and styles of 80s rock and took them as building blocks for his new compositions. Now the 80s were and are far from my favourite musical decade where I was able to live through. In fact my least favourite to date. What is happening on The Storm Before The Calm though is something I do not mind experiencing at all. This is underscored by the Hussey led track 'The Delicate Balance Of Everything'. It's simply a great track. Dark, moving and gripping.

This is something I have noticed more often in the recent years that artists starting their work with influences in the 80s have taken those influences and produced great new work, where I to this day still can't work my way through many a 80s album that some people list as absolute masterpieces. So let me just be happy that I can enjoy an album like The Storm Before The Calm to the max.

The other albums of Beauty in Chaos can be bought here: