Two Margaritas At The Fifty Five. Elizabeth The Second 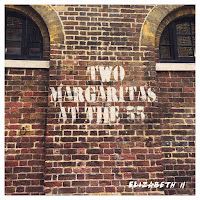 For years Bongley Dead was the only punk rock band from Italy on these pages. Those days are gone from today onwards. They are joined by Elizabeth The Second from Padua. With Two Margaritas At The Fifty Five the band throws it first mini album into the world. An album filled with light sounding punkrock and 60s garage rock anthems.

Elizabeth The Second, not to be confused with the long reigning queen bent on breaking all reigning records there are to break, is a rock trio from Padua. Ben Moro sings and plays guitar, Michele Venturini plays bass and Luca Gallato drums. Only around for a little over a year, the band has obviously found its pace. Ben and Michele are old friends who played together before. After meeting Luca the threesome blended into this force, that does not hide its influences and jumps from them to create its own music. Names referenced are The Strokes, Arctic Monkeys, The Libertines, The Stone Roses. There are more you’ll find when you start listening. Anyone dropping these names deserves at least one chance and when that level is, at a minimum, met, more in-depth listening becomes an option.

I will not go as far as stating than Two Margaritas At The Fifty Five clocks in on the level of these bands’ first records. All The Strokes came up with after their 7th song on ‘Is This It’ though? , easily. That is what Elizabeth The Second does well, it captures energy and balls it into an energized song, while singing Moro sounds like he will soon be bleeding parts of his larynx for us.

‘No One Cares’ is the first song and single. A few things are noticeable straight away. The bass and drums fill up most of the sound. The guitar opens the song and the album. The sound higher than I would have expected. When it drops away for the first verse it is clear that this song is about tightness and not about playing as much as possible. There is a hint of The Living End in the music and chord progression. It is the dynamics that make up the backbone of the song. So where the music is fairly elementary, the magic is kept for the vocal melody that is allowed to swirl around the music. Together they make for an excellent first single to the album. Punkrock meets pop with a hint of rockabilly.

That high and deep sound of the rhythm guitar is a signature sound for Elizabeth The Second. An overdubbed lead guitar in ‘Mickey’ with a nice effect on it a frolic they allow themselves it almost seems. The band is good enough when keeping things basic. Here the warbly sound is nothing but a nice extra. The tougher solo later on is of the solid and necessary kind.

The playful ‘Yesterday I Was 20’ is the third song that convinces me I am listening to a good album. Mission succeeded it seems. Again the band mixes punk, with dynamics and adds some psychedelic twists in the interlude. The result is a hybrid song that has two faces, the switch back to the punkrock part is not as subtle as good have been but forgivable.

The two final songs keep up the mood in the right way and make sure that my feeling about Two Margaritas At The Fifty Five remains fully in tact. In fact the reggae rhythm of ‘Gimme One Euro’ provides the album with a nice change in listening, adding to the fun.

Italy has another fine band on my list (and don’t forget to check out Bongley Dead if you haven’t before!).

You can listen to and buy Two Margaritas At The Fifty Five here: