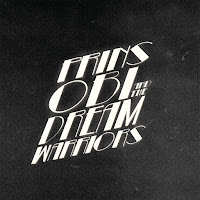 Prins, notice the Dutch spelling, Obi and the Dream Warriors. Another band with a special name from the Greek Inner Ear Records label. Tango With Lions, The Frog Ensemble, Vagina Lips, all not your average band names.

Another resemblance is a love for music from decades back. In this case the love reaches all the way back to the late 60s, so influence from a band like The Kinks is not hard to detect as is 60s psychedelia and the postpunk/new wave from the late 70s

Still, 'Prins Obi ...' is not an easy to digest album. This is not love at first sight, but more a strained relationship that is very worthwhile maintaining, but involves dedication and work.

Prins Obi and the Dream Warriors is the solo vehicle of George Diakenesis, singer of the band Baby Guru and pharmacist in a more daily life. After 2017's 'The Age of Tourlou', he returned with a new album in November of 2018. Assisted by a host of musicians, his live band turned backing band, Diakenesis delivers a versatile album touching on several musical styles, moods and languages. His native tongue can be heard in two songs, that also have a title written in Greek.

The start of the album knows no holding back. 'Concentration' may start with an electronic sound or two. The band kicks in and a Bowie influenced song kicks in full force. A 'Hang On To Yourself' kind of beat and staccato playing form the backbone of the song. Find Bowie again in 'Fingers' later on. 'Flower Child' is even louder, while being adorned with psych traits. Two chords just go up and down at a heavy pace. An up tempo 'Set Me Free'. A wah wah solo tops things off nicely. It is in the tightness of playing that I detect the postpunk/new wave, that will slowly disappear completely from the album.

In 'Negative People' the tempo does not so much go down, the song does provide an insight in what Prins Obi ... is capable of. The band is not afraid to strip down its sound nor of a bit weird chorus. This chorus is deep 60s shit. Something like 'Mother Nohead' by Group 1850. The combination with the tight verses and bass/drums in the chorus works well. The details in 'Negative People' show that the song is well worked out with a keen ear.

This level is kept up effortlessly in the song that follows, 'Astral Lady Blues', although it is more classic in its outcome. The surprise comes in the first Greek song. I think it says 'Divi' in my spelling and I hear the word yassou, but there my knowledge stops. A nice little organ adorns the psychedelic ballad. The bass, played by Sergios Voudris, again, is a prominent feature in this song. The second Greek song is also slower. The 60s are there again, yet in a much more poppy way. That also goes for the song that follows. 'Sally Junipero' is the kind of psych pop David Bowie was capable of in the late 60s and early 70s. In short there is a lot of variation and approaches to enjoy, making it harder for me to comment on consistency. Were it not that most songs make it to a necessary standard: quality.

The tightness of the first bunch of songs have been left behind for a while when I get to the end of the album. In 'Guilty Pleasure Theme' the band goes off the straight path some more. Getting close to Frank Zappa's 'Freak Out' outings. Weirdness is not far away here.

Prins Obi and the Dream Warriors fall into a long line of modern bands delving musically into a time long gone. The interesting thing is that the band does not let itself be captured in one sound or style. Diakenesis is not the best singer and his songs in many ways have been heard before, but what he does right is to make intriguing music and capturing different styles in the exact right ways. When a The Kinks style ballad, 'Wide Open', ends 'Prins Obi ...' I feel fulfilled but also ready to play the album effortlessly again. Not my every day, run of the mill music this is, but, yes, simply good.

You can listen to and buy Prins Obi & The Dream Warriors here: