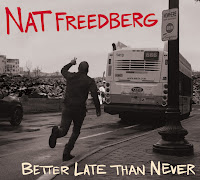 There are moments in life that are extremely annoying. The picture on the front of this album by Nat Freedberg is one of them. Often there is no one else to blame for coming too late, is there? Perhaps that fact makes missing the bus/train/etc. so extremely annoying.

Better Late Than Never contains nothing that annoys. In fact the album brings nothing but pleasure. Freedberg rocks the world a little in his own laidback style and nasal, elementary way of singing. Nothing is made better than it is and all is just fine.

With his his single Devil Rockin' Man he had already made these pages (read on here: http://wonomagazine.blogspot.com/2018/12/devil-rockin-man-dan-freedberg.html) while making this promise of a whole album coming soon. My main question was whether his what you hear is what you get style would amuse me for a whole album. Fact is that I would buy it immediately should I run to it in my local record store, that unfortunately is a long, long way from Boston where Freedberg usually haunts local venues.

Coincidentally I heard 'Taillights Fade', Buffalo Tom's first (near) hit single over here in NL. Listening to 'Only Takes A Minute' I know exactly where the two songs meet. Freedberg captures the energy and melodic strength and leaves out the sense of loss permeating 'Taillights Fade'. Freedberg shows the directness of a hard working man going about his business not being affected too much by daily life and even better at hiding his feelings when it does. Like this life this album moves forward, somewhat predictable because of it but never wavering nor faltering.

The line "All my love lives on, all my love still strong" tells it all. In a style bringing R.E.M. to mind, with Peter Buck tremelo effects, the song goes ever forward.

Nat Freedberg is not the best singer and he knows it. He delivers his songs without any frills. Singing in the way he knows he comes across. Vocally that makes the album somewhat one dimensional, were it not that his way of delivery not only fits the music, it simply works in this context. A slight tone of contempt for everything, without turning into a sneer, is in his voice. An old punkrocker about his old tricks.

Freedberg started his forays in music in 1981 in a band called Flies and fronted several bands through the years that never reached me. Better Late Than Never, his first solo effort, has and so we have a great album title celebrating both these fortunate occasions. Rocking songs like "I think I Died And Went To Heaven' or 'World To Come' make my world a little better. They are also the songs that give the album a kick in the proverbial ass at the right moment. They are just a little different and breath life, fire, wildness. Songs that are just a little dangerous.

Better Late Than Never rocks. It is that simple. The guitars are all over the place. Several layers have been stacked on top of each other. The firm drumming by Ducky Carlisle sets a firm pace for all others to follow. And follow they do.

This album is perfectly balanced. After a strong start, a little dip, from the middle part onwards it only gets better and better. "Madame Butterfly' ought to be a huge hit or at a minimum all over rock radio. This song is so much fun, with the rhythmic little piece of guitar playing and a great chorus it has it all. (Okay, it is followed by a bit schmalzy ballad, that shows that Freedberg gets away with a ballad to.) At the right moments Nat Freedberg allows for a little pop element, an injection that does Better Late Than Never a whole lot of good. Again the word balance comes to mind.

Summing it all up, Nat Freedberg delivers a fine first solo album. It rocks out in all the right ways and then this just a little bit more. Better late than never, need I write more? Yes, better safe than sorry, as this is a great, rocking record you do not want to miss.

You can listen to and buy Better Late Than Never here: