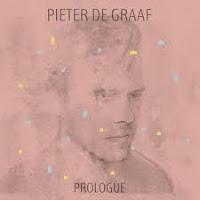 To my surprise I was sent an album under the genre identifier 'classical music'. Classic?, I wondered. Here I am, the self-proclaimed (indie)rock, pop and (Neder)beat master, with an album containing piano compositions?! Six of them as well.

Now those who follow this blog know that I have been reviewing (semi)classical compositions for some years. Especially now that they are a main feature of Kairos on Concertzender for something like two years. In fact I would not be surprised if Pieter de Graaf shows up there some time soon. His music has the right features for the show.

To some De Graaf may be known for his work with the Kyteman Orchestra, although he has worked with more artists. Always in a serving role. When he asked himself 'what is it that music wants from me?', the answer apparently was 'Fermata', his debut album that is scheduled for release later this year.

So Prologue is a six song mini album, perhaps a teaser for what is to come. The funny thing is that I am totally at ease with Prologue. The piano is the central instrument and De Graaf plays it with ease. I can almost hear his concentration in playing and yet the instrument is so fluently played, at least to my untrained ears, suggesting a total comfortability with the compositions. Sparsely another instrument can come by, like a violin or voices and an organ in 'Rise And Shine'.

In the songs De Graaf creates different moods by playing with tempo or with sounds in the background as in 'City40'. By doing so he has made a totally versatile album that is extremely worthwhile listening to. Somehow it is not hard to imagine his music to be a part of a band playing it. Like Rick Wright's compositions for Pink Floyd became full fledged songs, which I'm reminded of here and there.

My guess is that De Graaf's music is called classical because he plays serious, instrumental songs. Listening in practice for me shows me that I'm hardly pulled out of my comfort zone at all. To my surprise certainly. A good song is a good song, also when played solo on a piano. Just listen to the upbeat 'Charlotte's Daydream'. And that is all there's to it.

You can listen to some songs here: