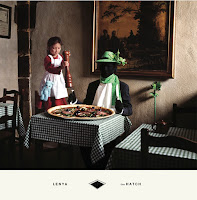 In the bio it says that this album was inspired by seclusion. An appropriate title then. The Hatch reminded me instantly of the hatch in 'Lost', that weird but pretty great tv series of a few years back. The hatch beneath which a solitary guy was protecting the world, the island or what was it really?, with the 1970s technology.

Lenya is a singer-songwriter from Rotterdam called Julia Reinhold. She released an EP called 'Backwoods' in 2012. Now in 2017 she is ready to present a full album to the world. And it is time to take notice.

Why? Simply because her songs invite listening. Her extremely pleasant, slightly deeper voice is where this aural journey starts. Serious, cool, distant and yet inviting. An intriguing mix indeed. Diversity is the second strong point of The Hatch. From an 'Eleanor Rigby' like ballad to indie rock, but all the time with an orchestra somewhere in the song. The string section does overtime sounding both delicate and firm, just as the song calls for. Lenya is not afraid of making her songs a lot bigger than strictly necessary, I'm happy to say. There is a lot to explore and follow on this album.

Producer Jakob Sigmund, in another capacity guitarist and backing vocalist in Blaudzun, has provided Lenya the circumstances to excel in. Her own role is not to be neglected as she is the composer and arranger. Sigmund has made all come together and made the sound not to bright, not to happy, contributing to the mood of The Hatch. The voice is a part of the whole and not a dominating factor. Yes, Reinhold's voice is important, but woven in and out of the mix as part of the arrangement. Like in 'The Collector' where it weaves in and out of the string section. In a way I would have wished for a million dollar budget for The Hatch. Imagine what it could have sounded like then....

Taking into account that this is a 100% DIY record, the admiration of this feat only grows. Lenya takes the listener on a musical trip with songs that are driven by a piano or guitar with no percussion at all and on one with a solid drums and bass. She excels in both. In that way she has something of the early Kate Bush, another master of atmosphere, but also of fairytales. For that Lenya is too serious, probably also somewhat older as Kate was then.

There is a lot to enjoy on The Hatch. The songs may have been inspired by solitude, there is nothing estranging about them. Listening to music, in essence, is a solitary event. It may be experienced by many at the same time. In the end deep down, every person's unique in the reception of that music. The Hatch offers a lot of elements that will draw people towards it, wanting to listen to the music on the album, experience it, undergo it. To follow the mood, the arrangements, the diverseness of the approach to the individual songs. Lenya has drawn from at least 50 years of pop music and taken only the best to adorn her own work. The singer-songwriter songs have been dressed up in the most pretty of ways, but all will be just as strong when performed in their bare essence. Strong, eventful and emotional.

Lenya has surprised me in a most pleasant way with The Hatch, an album that I have played more and more over the past weeks, from that moment of the very first listen session, when I thought, oh, yes! and put the album on again.

You can listen to 'Serpentine' here: