From My Veins Will Fall. Ali Holder 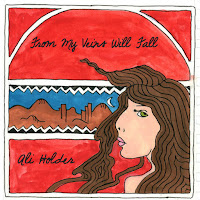 Who else tipped me on Ali Holder but that connoisseur of female Americana, Erwin Zijleman. I liked 'In Preparation of Saturn's Return' so much that I ordered the album on Bandcamp and wrote my own review as well. And now Ali Holder is back with a new mini album that I seem to like even more than her previous effort.

On From My Veins Will Fall Ali Holder has stripped down to the basis of her music. To what she, in my imagination, could sound like live with a just a basic band around her. All embellishments, no matter how alive, are gone and makes her voice jump out in a very direct way. The first strong point of this mini album.

All you hear on From My Veins Will Fall you will have heard before. In that way there is nothing original on the album. But before you stop reading, you better pay attention first. Although Ali Holder falls into a long tradition of singers in the Americana/roots/rock tradition (she likes slashes, so let me put in a few here), she adds herself to this mix and that allows her to climb to the higher branches of the tree in an extremely fast but graceful fashion.

The basis of the album was laid in a ten day isolation writing session on a Texas ranch with more buffalo than men around her. The daily desert was a Stephen King book, both as reward and inspiration. These ideas she brought to her band and producer Andrew Ratcliff and together they turned her songs into these free-flowing towers of roots power. Fluent yet powerful. And there is strength number two for you. On this album Ali Holder impresses without having to use any kind of force. The songs do all the work for her. I'll cede you the guitar solo in 'Don't Show The Devil', which is using brute force, but it is the exception to the rule.

The songs on From My Veins Will Fall are not perfect pop songs. There may be a concealed pop element in the songs, but they are not pop. Perfect though they are. It all fits flawlessly, the songs sound like they were always here as if they are cover version of long existing songs. So here comes another strong point: we are listening to Ali Holder originals here that touch this level of proficiency. They are totally original in all their familiarity.

Finally I mention the great playing and singing on the album. The harmonies on 'Elastic Time' are fabulous. The interplay of the band is functional and supportive, making Ali Holder stand out, and then going the extra mile, making the sound so smooth, while keeping all the edges in the right places, making the music more dangerous than expected. The is the best of the multiverse, certainly not both worlds only.

Fellow Texan Amanda Pearcy comes to mind in the final song, 'Ghost Of A Man', although she sings about 'Comfort The Soul Of A Man'. In feel the songs resonate the same way for me. Again the edge comes out with the electric guitar at the right moment ending the EP on another musical high.

Where 'In Preparation Of Saturn's Return' was multi-layered, even eclectic in parts, From My Veins Will Fall is much more even and same minded. At the same time, it is so much better. It's too bad that I discovered the album too late, as it would have made my top 10 last year, with two fingers in the nose.

You can listen to 'Ghost Of A Man' live here: