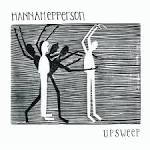 Maintaining a blog has its advantages. Every once in a while an envelope falls on the floor with a cd inside. Often I'm surprised by a record that I would never have heard and most likely never even would have heard of. Hannah Epperson's Upsweep is one of those albums.

Hannah Epperson is originally from Salt Lake City, but now resides in NYC. The place to be for someone who produces music like this. Experimental, without compromise and non-pleasing, at least at first listening. A solo performer, who with her voice, violin and loop pedal goes out into the world and creates her songs on the spot, time and again. As such not unique, but daring as live she gives herself up to the patience of an audience.

Upsweep is an album with two sides. The one called 'Amelia', the other 'Iris'. Although both sides are serious, they have a totally different character. Amelia is electronic with loops and harmonies like can be heard on R&B records. Epperson's violin comes through in a quite prominent way at times and then is gone in the electronics. When present her violin is able to screech like 'Papa' John Creach's on Jefferson Airplane and Starship records. The almost fragmentary music calls for attentive listening to divine the deeper layers of the songs. The place where music is "hiding" itself.

Let's focus on 'Iodine (Amelia)', when finally the great release seems to be approaching, synth drums over which the violin swells as well, the big release is given by a simple bell sound percussion, like earlier in the song. She fooled me here alright.

In the way of playing the music there is something of Peter Gabriel. The way the songs are structured and their punctured pace is where the two meet. They drift apart where the colouring is concerned. Epperon's music is so much more elementary. Lots of things that could have been there, simply are not. While the same effect is reached. That is what impresses me. The mood reminds me of Kate Bush records from 1984 onwards.

"Anyway, why did they deviate from that story?",

an uncertain old female voice says. Like a message from a conspiracy theory. It signals change. After five songs we move into the second part called 'Iris', with a song called 'Farthest Distance (Iris)'. The same songs come by but now with plucked and bowed violin. The electronics have been laid aside for organic violin music, but we do get fooled again here and there with dubs. Because of the violin the music gets a (modern) classical atmosphere, although the singing keeps us in pop circles. The singing, light and weightless, brings Amber Arcades to mind.

The differences between the two sides to the album, makes it as if the songs only have the same title. Hannah Epperson plays with the moods of her listeners. She reaches me in totally different ways. On the one hand with the electronic experiments that twist and turn through my ears and with the singing and playing that is going on during Iris. Upsweep is a fascinating album where avant garde meets pop and classical music singer-songwriter songs. The music is clear as a bright winter's day, warm as summer, cold as winter and dark as midnight on a cloudy day. Upsweep is all of that and much, much more. Besides fascination there is quality. This writer was not just surprised, I'm won over. Totally.

You can listen to 'Story (Amelia)' here:

You can listen to or buy Upsweep on Hannah Epperson's Bandcamp page: