For All My Sisters. The Cribs 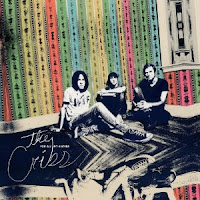 The Cribs? Never heard of the band until recently. Life is full of these little surprises that make it so much fun. The Cribs is around for 13 years, Johnny Marr was a member for three years, David Jones of Nine Black Alps, one of my favourite albums of the 90s 00s?, when was it, too long ago, is touring guitarist at present. For All My Sisters is The Cribs' sixth album. Uncanny that I have missed all previous five.

With a tabula rasa where The Cribs is concerned I can listen to the band's latest release without any preconceptions. The first thing I notice is a sort of youth and freshness that hovers over the sound of For All My Sisters. As if this is the band's first album. The Cribs main frame are three brothers by the name of Jarman, Gary, Ross and Ryan from Wakefield in the U.K. The lightness in the music is due to the harmony singing of the three brothers. I can't say that they come close to The Beach Boys, but Weezer? Easily. It is that band that the solid sound of the powerpop The Cribs produces reminds me of most. It is then that I notice that Ric Ocasek, The Cars' guitarist and songwriter, produced For All Our Sisters. That explains something, I suppose.

The Cribs is another band that is big in the U.K. That may be a reason why the band is less known here in NL. The next big thing in the U.K. is ignored over here for at least over a decade. The guitar work reminds me Hurricane #1 and The Stone Roses, those lead lines that continue all through a song. No heavy chords pounding here. All melody. That makes songs the busy kind as there are not a really lot of points for rest or reflection. Where this didn't matter for The Stone Roses, it did for Hurricane #1 and The Cribs.

While listening further into the album, something changes, I notice. I start getting extremely bored. More and more I get the idea that I've heard enough. So much so that I dropped finishing this review completely. In this lost hour on a later Sunday evening I return to the album. Put it on again. Again the beginning with 'Finally Free' is fine. Strong guitar work, a sound rhythm section, but the stadium anthem wailing of the singing of the Jarmans is already crawling on my nerves as is the all over the place lead guitar.

There is just no restraint in this music. As I already put some effort into the review, I've decided to finish it with the thoughts I have at this point in time. I rather not write a negative review. Why spend the energy while I could be doing something positive in the meantime? Next to the fact that I can imagine that someone, in this case The Cribs, puts in his best efforts. Who am I to judge that? Next to all that these restrained and politically correct reasons, I have a personal one as well: I write here to share the joy music gives me.

Alas, this time an exception. The more I played For All My Sisters the more the record irritated the hell out of me. In other words, where I had a positive mood at the first two tries on the basis of which I wrote an intro, it stopped there. No deepening affair with The Cribs for me. Fear and loathing with The Cribs instead.

You can listen to 'Burning For No One' here: