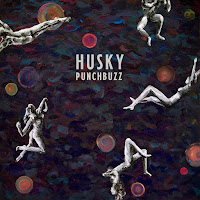 It was in the first year of this blog I reviewed the debut album of Husky, 'Forever So'. It was months old, over here and possibly much older in Australia, at the time and one of the lesser read pieces on this blog. In the meantime I seem to have missed an album in 2014 called 'Ruckers Hill'. And three years later here is Husky's third offer, 'Punchbuzz'.

In my review of 'Forever So' there is a lot about singing nicely together, about rest and harmony, but what struck me most rereading my review, is the fact that the album conquered me slowly. This was far from a hitting it off right from the beginning kind of record. Was that different for Punchbuzz?

Yes and no. It is when I play the album on the small speakers in my office. The album is alright but sort of non-descriptive. The major change, so the no, presents itself when I play the album in the living room over the much better loudspeakers and amplifier. At these moments Punchbuzz comes alive and shows all its nuances to me.

Punchbuzz starts with a start. Drumming on the floor tom, setting the tight pace of 'Ghosts', before the melodies that enrich the song burst loose. The tight verses, the jubilant chorus, where the drumming changes and a lead guitar enters playing huge chord accents that open up song and album. And yes, it makes me sing that strange song 'Tokyo' by The Wombats, because of all the vampire references in both lyrics.

Next up are the references to Fleetwood Mac at its 'Big Love' period. 'Shark Fin' has all the ingredients, although 'Big Love' was far more innovative in 1987, perhaps I should write is here. The Mick Fleetwood drumming, the lead guitar sound and way of playing, the feel and the beat. Husky manages a song that holds energy and a positive vibe, despite the downwards singing of Husky Gawenda.

These up-tempo songs are not what I associate Husky with. The main feel of Punchbuzz is laidback. Something that starts in the title song. The slow, high singing of Gawenda, the languorous synth lines of Gideon Price and the relaxed bass of Jules Pascoe in combination with the firm but slow drumming of Arron Light. The muted guitar sounds in the intro reflect a relaxed tour to the 'Late Night Store'. Husky manages to put a few vibes into this song, by changing the way instruments are played, while Gawenda keeps up his way of singing, so that his voice floats on the ever changing songscape below him. The effect is that slowly but surely a great song is created. A song that impresses and wins me over for sure.

The effect that is created by playing the, in general, soft sounding album, somewhat louder on my stereo set, is exactly what Punchbuzz needs to bring out all its charms. The hidden layers and the depth in the sound the band created with producer Matt Redlich, member of Holy Holy, all shine so much brighter when heard in full. Where for some albums the difference in far from essential, it seems to kill Punchbuzz in its tracks. It comes truly alive. And that is when I start to enjoy songs like 'Splinters In The Fire' more and more.

So again I was not convinced by a Husky album in one go, but this time around things were a lot easier. That some of the songs have some familiar references are a fact that lift the album up in this case. Fleetwood Mac, this time around Christine McVie, returns in 'Walking In Your Sleep', in the guitar intro and the keyboards. Yet, this is such a beautiful song. It makes loving Punchbuzz fun alright. When finally some west coast pop influences enter as well, although the most famous FM line up could qualify in its own right of course, Husky comes out as the winner.

I had all but forgotten about Husky over the past nearly five years, but the band is back in my musical attention span. In fact, Punchbuzz is on the longlist for best albums of 2017.

You can listen to Punchbuzz on Soundcloud