...And Don't The Kids Just Love It. Television Personalities 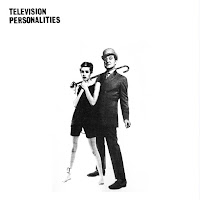 Fire Records recently announced that it was re-releasing four albums of the band Television Personalities. Who? Exactly that was my thought. I honestly had no idea. So I turned to Wikipedia and found out the Television Personalities (TPs) was formed in 1978 in London, so just after the punk hey day. These days that means the band was post-punk. After a single and an EP in 1981 the  debut LP saw the light, '...And Don't The Kids Just Love It'. This album was followed by 'Mummy You're Not Watching Me' and 'They Could Have Been Bigger Than The Beatles' both in 1982. After a split and a regrouping in 1984 'The Painted Word' was released. Later more albums saw the light of day after the band reformed once again in the late 80s.

Four albums is a bit too much to concentrate on, so I'm going to focus on the debut album. My first impression is that a few things came together on the album: youthful enthusiasm, pub fun, a love for punk and 60s garage rock and humour. If anything TPs are not afraid to throw in an oddball here and there, basically wrecking the pace of the album in trade for a laugh or two.

Like other re-releases in the punk realm recently like New Zealand's Features and  U.K.'s Scientists I am taken again by the fact what fun music I missed while being deep into the likes of Pink Floyd and David Bowie to name two acts I bought a lot of records of in the 70s and early 80s. ...And Don't The Kids Just Love It is nearly instantly liked by me after I listened for the first time.

Don't expect originality. This band listened quite well to its heroes. So expect The Who to come by, The Jam is there, some The Kinks in its proto-punk incarnation. Also the sort of music Madness became famous with, barring the Two Tone ska, is heard. Even some light psychedelia is there and Pink Floyd acoustic, even some Zappa madness and why not? TPs has a lot of faces.

Dan Treacy is a singer who has a few voices and uses them without overdoing it. He formed the band with a schoolmate, Edward Ball. After Joe Foster and Empire (a.k.a. Mark Sheppard) joined on bass and drums the band set of on its way to '...And Don't The Kids Just Love It'. Foster left fairly soon after though.

With titles with peoples names in them, including Syd Barrett and knowing where he lives -talking of weird songs and topics- and references to youth and youth culture, TPs sets itself in a very British tradition. Observing their surroundings, commenting on the world, in a good humoured way. There's no anger on ...And Don't The Kids Just Love It. I had never heard of 'Jackanory Stories', a book read to children on the BBC. I can hear how that opened up Dan Treacy's world, although he may not have liked them all.

This is exactly what sets TPs apart from the punk scene of a few years before and ties them firmly to the 60s: the lack of anger and the fun of playing, probably even the fact of being alive. It's this fun I can still hear in 2017.

Television Personalities never made much of a dent in the greater scheme of things. Although it is said that the band was rather popular in my home country. Well, the writer of the bio could have fooled me there. That said, the re-release is well-deserved. This is music that is great to get acquainted with, 36 years after the release. And then imagine that I have three more albums to familiarise myself with. Life has been worse musically I can assure you. If you like "postpunk" and 60s British garage rock with some sidesteps, '...And Don't The Kids Just Love It' is your kind of album.