Once In A Long, Long While. Low Roar 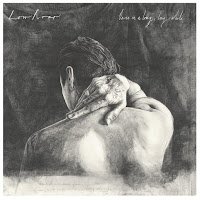 Music for Low Roar is a serious matter. The first song on the album may be called 'Don't Be So Serious', whoever it is addressed to, it does not apply to the band itself. Like the cover of the album, beautiful yet solemn art, the music is of the kind that doesn't allow for bright colours.

Low Roar is from Iceland, by way of California. In 2010 Californian Ryan Karazija moved to Iceland and from there released his debut album '0' in 2014, that apparently draw a lot of attention from the gaming community. As I am in the community of listening to and writing on the music I hear, it passed me by.

Not so with Once In A Long, Long While Ago. The album was lying on my doormat a while back. The cover art drew my attention straight away. So I started listening. During the first song I knew that Low Roar was not going to be an easy affair. I had to work to get into the mood Karazija built together with Tunng's Mike Lindsay and producer Andrew Scheps (with RHCP, Adele and Hozier to his name, Low Roar made quite a catch on producing duties). Karazija is responsible for most of the sounds on the album, with a duet with an Icelandic singer and some subtle horns here and there as exceptions.

At the heart of it Once In A Long, Long While Ago is an album to listen to with headphones on. All the subtle layers will come out and present themselves one by one. This way the album slowly comes alive and becomes far more meaningful. Some songs are more a compilation of sounds built around the vocal melody. Whatever it was originally composed with, has been stripped away after which the songbuilding started. 'Give Me An Answer' is one of the songs in which this works really well. Slowly the song works its way towards the chorus, with Karazija's light voice leading the way towards salvation.

In some of the songs there is an ever so light touch of alt-J. The strongest in 'Waiting (10 Years)', but the song could just have easily been a part of the 'Twin Peaks' songbook. Deep down there is a folk influence that Low Roar does not mind showing. The mix of electronics and more traditional instruments works well. Both add to the atmosphere and influence it ever so lightly. In 'Waiting (10 Years)' they even seem two separate musical bodies that come together and are joined, intertwined to a whole. Near the end they separate again to each go on their way. So subtle, so well done.

Low Roar is not afraid to submerge us in experiment as well. In 'Crawl Well' instrumental sounds meander out of my speakers. At first nothing seems to happen. There's just a sound, almost like music coming from under water. A drone, weird sounds. .No ought to love this for his Kairos radio show. It's the sort of thing that comes by regularly there. Slowly something emerges from the primeval soup, but it's still awhile before something resembling a melody joins the drones. The experiment ends with a voice over a piano and a synth: the beautiful song 'Poznan' entered my room.

Low Roar is the exactly right name for this project. There's not a single roar in this collection of songs to be found. However, no matter how delicate it all may be, there is no lack of confidence on this album. So a roar it is, but of the softest kind possible, like a whisper. Anyone who allows himself the time with Once In A Long, Long While will be sure to hear it. Ryan Karazija does not need to raise his voice to be heard.

You can listen to the whole album here: