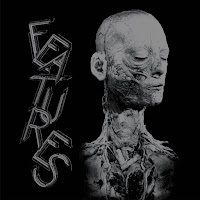 Another release from Auckland, New Zealand based record label Flying Nun. Let me start by giving a compliment to whoever designed the artwork of this album. This must be a marvel to hold as an LP. As differences exist in this world I'm making do with an MP3 version and the artwork on my screen.

X-Features is actually a re-release. Music from three decade and a half ago, yes, punk. Like the recently rediscovered The Scientists Features also takes the punk revolution just a little further than the original punkers who reared their ugly heads in 1976 in the U.K. Features has already let in influences from the second generation like Gang of Four, as well as from hardcore bands without forgetting that songs are stronger when they hold a melody as well. Hence X-Features is an album which I can totally relate to, without being drowned in nostalgia. I was everything but a punker in those days, although I did sport a lot of buttons, bought during my first trip to London. Because I moved recently I even ran into a box containing them all. Rusty pins and all. Some are on my guitar strap now, so I'm sporting them again.

X-Features starts with a delicious track called 'City Scenes' that caught my attention first. It is a hybrid of a song in which a lot of different things are going on at the same time. It starts slow, in a chaos, a bit reminiscent of The Small Faces' 'Lazy Sunday'. Snippets of music are distributed in a loose fashion, there's a whistle in there and empty spaces. When the song bursts in full force, there are all sorts of psychedelic undertones hovering over the alternative rock song. All sorts of 60s melody lines fly around. It's the vocal delivery and the lead guitar that follows the vocal line closely that give the song a punky attitude. The talking that is going on in the background brings back 'Lazy Sunday'. The instrumental melody lines in between the singing are straight The Who. The bass is certainly John Entwhistle influenced but definitely not as pyrotechnic. 'City Streets' is a confusing song, but one I like immensely. Features put in so many ideas into the song, that it could have made an album on them, but chose to ball them all into this surge of energy. At the end the song slowly dissolves, closing the circle. What a statement.

The Beatles come by. 'Secret' is one of those song from the early beat days, almost made over in an unrecognisable way. Truly covered. The song is all chaos, played by a band that seems barely able to contain what it is trying to do here. The bass again is very strong. The rest of the band seems hardly able to catch up. Here and there the song simply falls apart and is picked up again. Most members seem to lack the skills to play what they stage here. And yet it works. That's punk for you.

Singer Karel van Bergen, some Dutch pride can be slipped into this review, has the right sneer for the music going on on this compilation. The rest of the band, Jed Town (guitar), Chris Orange (bass) and James Pinker (drums) have listened a lot to to what happened right after the Sexpistols went out of business. PIL, Wire, it's all here and apparently the band in its very short stint in life, became very influential for what was to happen on the post-punk scene in New Zealand after them.

Features never came far enough to release a full album. X-Features brings together all singles, 12"s and rest material to make up a 14 song album in 2016. Certainly not to late to do so. Features is a band that deserves its place in the spotlight. The excitement is catching, the execution grows better by the recording and the songs better. There is simply more focus. From a badly played, toss-away b-side 'Secret' to a perfectly played, experimental post-punk song 'Victim' is a long way in what was not more than months at the time. The influence of Wire and Gang of Four is all around. The eclectic, rhythmic playing, the sharp edges tone. It can't be further away from the band's first single. But listening to 'Rescue', a fast-paced rocker that is in danger of derailing any minute, but never does, I am 100% certain that Gang of Four has never made a song this good and I have a hard time to come up with a Wire of those days song this good. By the time the experimentation of 'City Streets' is let loose on the relentless rocking 'Here We Come,' I'm won over. X-Features is an album that everyone loving punk music ought to hear. The pounding is relentless, the psychedelic interludes provide breathing space for those in need of it.

Whatever happened at the gigs Features played, there may have been a serious derailing here and there, it most have been extremely exciting. This set of music balls an energy that begs releasing. There's absolutely no doubt in my mind who wins this year for the punk re-release. It's not The Scientist from Perth. There's just no competition mate.

You can listen to 'City Streets' here: