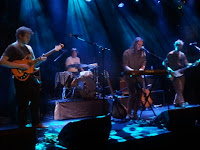 I Am Oak is a band that plays something which I can only call whisper rock. Somewhere underneath the silence are all the instruments that make up a rock band. Sometimes the instruments are even played as if in a rock band. The only thing is that the volume in the mix remains at whisper level, beneath the softly sung lyrics. Subdued, modest. soft. The contradiction is that I can hear that the instruments were not played at whisper level in the studio. Just mixed away on the record. So what to expect live?

No need to bring any ear protection I thought and I worried upfront about an audience that would never be silent enough for me to hear and truly enjoy this music. Well, I was wrong on all accounts. Yes, I could have used some ear protection during the show and yes, the audience was enraptured, ready for this show. Something else struck me also. I was really the oldest guy in the room. That changed, perhaps, when the band started to play and some people came down the stairs from the upstairs bar, but before that, easily. So many youngsters and hardly anyone in between. The age group 35-50 that I'd expected to come out for this sort of music was absent mostly.

I Am Oak on stage is a foursome. Thijs Kuiken, the modest, long-haired frontman is accompanied by Stefan Breuer on bass, Robby Wouters on guitar and Tammo Kerbergen on drums. The first two sing the oh so pleasant harmonies. The bass player is responsible for the deadpan public address when there's a silence due to tuning of a guitar. Together they are able to go from the softest whisper to a full out, eardrum splitting rock jam and everything in between. 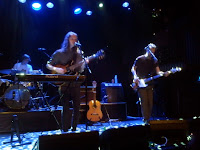 What I can't tell you is what the songs are called that I Am Oak played. Somehow I'm passed that age that it matters a lot to know these details and it just does not stick anymore. What I can tell you and what is more important, is that this band is truly inspired. Although I had expected to become one with the music sooner. The introverted presentation created a distance between me and the band. Like something I was allowed to be present at but not be a part of. That changed slowly. A matter of letting go on my end. What helped, oddly enough, is when I took on a more relaxed posture, hanging against the wall. Just following the intricate details of what is played by the foursome. From that moment on I could flow from admiration to enjoying. No, the songs of Thijs Kuiken are not full of joy and enthusiasm, but they are inspired. Together with his bandmembers an intricate play is presented that allows for many small details on each instrument to come forward in the songs. Together they make up I Am Oak's version of beauty.

When the acoustic guitar comes out the volume goes decidedly down. Even to just voice(s) and guitar. The audience followed suit in these most vulnerable moments for I Am Oak. It was even complemented by the band on the amount of silence it produced. A joke or well-meant? I fear for the latter, hope for the first as I Am Oak deserves to be listened to. Why else come to a band like this? (Or to any band for that matter. One can talk everywhere any time but why do so at a gig?) When Kuijken plays his keyboard, guitarist Wouters has some more freedom to present himself. The three configurations in which I Am Oak plays, present a nice diversity in its set. 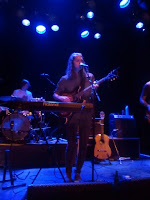 In the encore they played a song requested by someone in the audience and after that the sonic floodgates opened for the second time this evening. Finally everyone could let go. I Am Oak's drummer discarded the dish-towel covering his snare drum and the bass drum made my stomach reverberate. The guitars went into sonic overdrive. Two fingers work like a miracle in those cases.

With the LP 'Ols Songd', reviewed here some years back, in my possession, I went home. A beautiful cover it has, that really comes out on LP. It's signed, "Bedankt! Thijs. Let me reciprocate: "Bedankt, Thijs!" A fine evening it was.

You can listen to and buy I Am Oak's albums here: