As Safe As Yesterday Is. Humble Pie 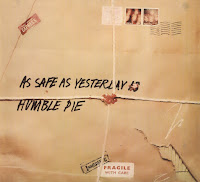 Wo. returns to his early days of discovering music, the hits played on the radio in 1968 and 1969. Hits that he hardly ever heard the albums behind right to this date. In this series he amends this by listening to those albums and share his experiences with you, reader of WoNo Magazine's Blog.

The last album in this series was The Small Faces' 'Ogdens' Nut Gone Flake'. That album's second single charted just before Humble Pie's first single. I am not aware whether I was aware at the time that the bands shared the same singer. It may well be, I just don't know anymore. Fact is that 'Natural Born Bugie' made an impression on me. Blueswise I was a tabula rasa at the time and would not have recognised it if it bit me in the calf. The song isn't on the original album I just found out, although I do remember having seen the odd looking sleeve in the stores. In the version I'm playing 47 years and a little after the release it is though. At the time of writing I'm listening to As Safe As Yesterday Is for the second time in my life. And boy do I like it. Where were you all these years?

Humble Pie was a super group, as was popular at the time. Steve Marriot came over from The Small Faces, Peter Frampton from The Herd, Greg Ridley from Spooky Tooth and a drummer called Jerry Shirley, 17 at the time, completed the line up. Musically I'm hearing The Small Faces at the start of the album. The impression is only temporary as As Safe As Yesterday Is touches on many musical styles. From blues, classic rock, 'Born To Be Wild' style heavy metal, psychedelia and folk, it all comes by. The hodgepodge of music that the late 1960s in the U.K. was famous for. Humble Pie clearly soaked up all and came out with its own blend. The heaviness prevailed though. The band rocked. The Stones led with 'Jumping Jack Flesh' the rest followed or took a left turn to a harder form of rock. Humble Pie is no Led Zeppelin, but certainly on the same track.

In fact, when 'I'll Go Home' burst loose in its full glory, it has me thinking that I'm listening to a remake of 'Communication Breakdown'. The riff is very, very similar. Now Jimmy Page has ripped a lot of music in his time and turned it into Led Zeppelin. So who knows where the basis for this riff lies. It becomes even weirder with the hitsingle 'Natural Born Bugie'. If there ever was a 'Get Back' rip off it's this song. At the time I never noticed, of course, now it has me thinking how did they get away with it? Next to Chuck Berry's 'Little Queenie' of course. The verses are simply one on one. The sound of the piano? Billy Preston on 'Get Back'. The guitar lick and piano and guitar solo? 'Get Back'.

Now I may seem all negative, but listening to the single that triggered this review and was added to this re-release of the album, I still hear the energy that I picked up in 1969. This song had something which not many songs that I knew at the time had. Exuberance, fun, life and rock and roll that incorporated the blues. It's still all there, no matter how many songs were added to the genre since, including the original blues masters that only came to me from the 80s onwards. 'Natural Born Bugie' remains an original to me, no matter what I hear in 2016.

'I'll Go Home' is a great track by the way. It rocks very hard in many a right way. It presages what is about to come in music (i.e. hardrock). A direction that The Small Faces might have taken if the band hadn't been forced to reinvent itself after Marriot left. The same goes for the hard riffed 'A Nifty Little Number Like You'. A song that is right up Led Zep's street as well, drumsolo and all.

In this series Steppenwolf was reviewed also, based on 'Born To Be Wild' as was Blue Cheer because of 'Summertime Blues', but both these U.S. bands do not come close to what is happening here. This is pure sensation, balled energy, hardrock prowess. 'Helter Skelter' in other words. (Yes, I think I have to do "the white album" in this series as well.) Hardrock comes from the U.K., that much is totally clear based on what I'm hearing here. Looking the album up on Wikipedia, I find out that the first song, 'Desperation', is a Steppenwolf cover. 'Buttermilk Boy' lends a little from 'Born To Be Wild' it seems as well as a melody line from The Who here and there.

As Safe As Yesterday Is is an album that totally surprised me. How come I've never listened to it before? That no one ever pointed it to me in the 70s? A band that was forgotten after a few years? It seems like it. It has an edge of roughness that is simply irresistible. 'What You Will' is another such a song. The chord progression is one that I may have heard many a time. It works a miracle. The classical guitar that is thrown in, is a beacon of light in the darkness.

The second add on it 'Wrist Job', an originally a B-side. With a big organ in the song and an electric piano, totally Ian McLagan style, it is a gem that I probably never heard before. It holds soul and rock all in one. What a song. It is Steve Marriot that plays the keyboards though. McLagan rehearsed with the band in the winter of 1969, before deciding the stay with The Faces. His legacy is on the album in the form of 'Growing Closer', which he wrote. The first song that is really different. Ferd Moyse of The Hackensaw Boys could have written it, just imagine a violin over it and you'll know why.

Steve Marriott wrote most songs on the album. Peter Frampton wrote two and they co-wrote the title song. The guitar playing on his 'Stick Shift' is in a style that I heard many a guitarist play on records not long after the release of As Safe As Yesterday Is. Influential that is called.

Concluding, I'm getting very close to thinking that As Safe As Yesterday Is is one of the great debut albums ever. The moniker super group Humble Pie was tacked with from the beginning was totally lived up to.

You can listen to 'Natural Born Bugie' here: