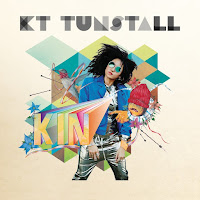 What a cover. I cover my eyes and wonder whether I am going to listen to the new album of whatever these girls in the hitparade are called nowadays. Only after I closed my eyes I clicked play to give KT Tunstall the benefit of the doubt, based on that bunch of fabulous songs on her debut album 'Eye To The Telescope'. To this day I think 'Universe & Me' is one of the most beautiful ballads ever made with 'The Other Side Of The World' as a great contender. It's called "The Ballad" in my own band.

To be honest, my expectations weren't very high. I couldn't get through KT's last two albums, so would I manage with number 5? The answer is a simple yes. I was totally surprised by the lightweight pop that sparkled out of my speakers. Like there isn't a worry in the world. Pop that truly sparkles, full of songwriting prowess. The music I hear on KIN is the first that has that same continuous quality I associated with KT on the basis of the aforementioned debut.

Is it because she's embraced pop as her metier of excellence? It may well be. Songs based on an acoustic guitar and fleshed out from there with a keen ear in search for fine melodies and harmonies. A few years back KT moved to sunny LA to start a career in soundtrack scoring. Luckily somewhere along the way she changed her mind. With producer Tony Hoffer she entered the studio to resurface with this fine collection of songs.

When we move further on in the album the mood changes to a late at night sort of music. Ballads take over, strings move in. With 'KIN' as the top ballad. The song meanders softly, caressing the voices singing the melody and harmonies. The second half of the album has a quiet counterpoint that is replaced by the perfect 60s pop of 'Everything Has Its Shape'. The sound is better and more spacious compared to then, as modern studios and recording techniques are capable of. The intention is clear. Add a 70s sounding synth as a lead instrument ('Lucky Man', ELP style) and the song is even more retro.

KIN is an album full of songs that flow so easily. There are no hiccups in any form. One could call the songs on KIN slick, were it not that they are very organic, well sung and oh so pleasantly free-flowing. They follow the road they ought to follow, thus aiming for the perfect pop song. It seems that KT Tunstall has arrived at a level of songwriting that simply hits that high.

There is a distinction in this observation though. The first songs on KIN aim for commercial success, where later on the album the songs are allowed to speak for themselves. 'Hard Girls' is enriched by synths and a more pumping bass guitar. Not to speak of the intermezzo, extremely trendy "hey"s. 'Hard Girls' matches the cover more than the rest of the album does. At the same time there's no denying the catchy way the song plays out. It is 'Turn The Light On', the second song on KIN, that truly caught me. The song has the same melancholy mood Fountains of Wayne was so good at. That can be heard on Chris Collingwood's 'Look Park' to. At the same time there are a few interesting things going on on the acoustic guitar. KT hooked me there, line and sinker followed soon after.

This level of songwriting and playing is continued right up to the very end of KIN. Add that there also are a few songs with a light edge to them found on KIN and it is close to a perfect pop album. What is left to say? Only one thing. Welcome back in my ears KT. You're very welcome there.

You can listen to 'Maybe it's A Good Thing' here: