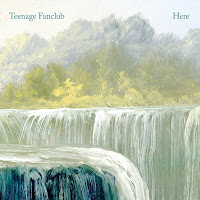 The sleeve is as dynamically rustic as the music on Here is. It's like time stopped so pastoral the atmosphere is. On its 11th studio album and the first in 6 years Teenage Fanclub remains true to its roots, renditions of the ultimate popsong, without ever once jumping off the apple cart.

My first Teenage Fanclub album was 'Bandwagonesque', just before or after I discovered Big Star. The band that at the time was mentioned in one go in any Teenage Fanclub review. So right after is much more likely where Big Star is concerned. The band is still an influence on Here, but then to what band in search of the better pop song it is not? Over the years I slowly lost track of the band and I find in 2016 that I have missed three albums since 2000s 'Howdy!'. That is 16 years and here is Here and I'm listening to it like nothing has changed.

Over Here is that blanket strewn out that does not allow joy in abundance. This starts with the singing. The voices of Norman Blake, Raymond McGinley and Gerard Love almost always are subdued, which is reflected in the music of the band. The result is music for the autumn. The time of year when the length of the days shorten, the light is lower, the leaves turn (spectacular) colours. Take 'Steady State' as an example. This moody song is slow, full of atmosphere and sung in a combination of emotions and dullness. The result is something beautiful, like a good Justin Hayward song in his Moody Blues days. A kind of pop that has nothing to with charts and radio success. A kind of song to cherish in the home, with just you and that song.

Here has several other pearls on it. One of the best is 'It's A Sign', where the singers of the band hurtle over each other to sing "'It's a sign" in the chorus, creating a lively atmosphere in an, again, subdued song. The only exception is when horns enter the palet of music. Not that exuberance shoots from my speakers, no, but it does alter the atmosphere in a positive way. Here becomes more alive, after which it is enough to again submerge in the prevalent mood.

Here pleases in subtle ways. The soft melodies, the modest instrumentation and the chord changes that always come at the right moment to provide a small spark in the song. Despite the fact that there are hardly any surprises on Here, the album delivers from beginning to end. Somehow I can't put the thought away that 'Had To Fall In Love' by Moody Blues is the blueprint for most of Here, without ever tipping that level of quality.

Reconsidering I also realise that it's not true, that I have been more or less tricked into this view by the second half of the album. The half that several times replaced my first impression. So let's look again in more detail.

Album openers 'I'm In Love' and 'Thin Air' are far more up-tempo, though it's easy to forget that fact listening further into the album. The surprise when I put on the album again, is almost huge. Have I heard these songs before? Yes, I have and the album grows a little more again. Becomes even better than I thought. There are more outburst than I realised at first. It is the softness, the delicacy of the music that somehow presses the rest away from memory. Don't be tricked, there's more to Here than you may think to hear at first. Guitar solos and all.

The influence of The Byrds also catches my ear. In the singing and in the melody of 'Thin Air'. Elliot Smith comes to mind as well. Just listen to 'Hold On. You'll know what I mean. By then I realise that I may have some catching up to do. Here is a beautiful record, so what of the previous three albums? Unless this is a total return to form, the rest must be interesting to listen to as well.

Here may be a neat record without anything jumping around in wild ways, Teenage Fanclub has released a new record that it can be very proud of. The subdued, melancholy pop sparkles and sizzles right under that lid of unassuming discreetness, which is the first impression the album gives off. Listen past it by opening that lid and a whole world reveals itself to you. I did and found an album full of wonderful musical surprises.

You can listen to 'I'm In Love' here: