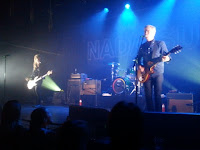 With a girlfriend who has the nickname "Smurf", it's not such a strange thing that this band is now named Nada Smurf in our house. As she is away for the weekend, it became literal as well the evening I went to Patronaat to see Nada Surf.

The band came into my life with that novelty hit 'Popular' and left it just as fast, as I did not really like the accompanying album, 'High/Low', at the time. That only changed with 'The Stars Are Different To Astronomy', an album that is not only a top 10 best viewed post on this blog, but also a near perfect powerpop album. The new one is good also but of course did not have the impact on me the 2012 album had. So when 'Oor' had a free ticket available, I decided to just go and managed to alert a true fan as well. 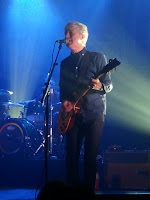 So it happened that a lot of the songs I heard during the show were new to me. Fact is I didn't much care about that fact. The trio went through an animated set of songs that all search for an element of perfection. One song may be slower others up tempo alternative rockers, they all have a common denominator: elements of brightness, optimism and a joy to sing and play that particular song. Whatever the topic.

With a full house Nada Surf played a sort of home match for true fans. There were people singing along, acknowledging songs or parts of songs, moving along with the rhythm. Although that I had no reference for most songs beyond the opening song of the show and the new album 'You Know Who You Are', that perfect bitter sweet song with that fun video in which drummer Ira plays the starring role: 'Cold To See Clear'. The show triggered some thoughts on how it was possible that I had missed the qualities of Nada Surf for a decade and a half. They fit in a long line of bands that I started to like in the 90s, The Posies, Fountains of Wayne, Teenage Fanclub, Weezer, etc. All bands who took the inheritance of the 60s as reformulated by Big Star into the 90s with great powerpop songs. It's never too late to catch up. 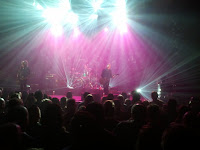 Being around for over 20 years means that the band members have moved into middle-age. Grey hairs, lines in their faces, but it all doesn't matter any more in 2016. Pop no longer is a youth culture but a culture of youth. So people ranging form 65 to 20 were dancing and singing to glorious pop songs. Played by a powerpop trio. Ira Elliot keeps a fierce rhythm going while supplying the sweetest of harmonies. Daniel Lorca holds the ground with a pounding, yet melodic bass, filling the spaces in between. That the ban of smoking in venues also goes for artists, was shown emphatically by Lorca. A cigarette was in his mouth for most of the show and afterwards, but never lit. Singer/guitarist Matthew Caws does all the rest. A lot of guitarplaying has to be done next to lead singing, with that sweet voice. I simply do not have another description for it. 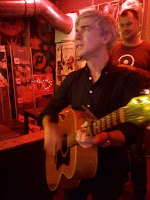 This was a show by a hardworking band that knows it has to work hard to make money. That Nada Surf had to stop the show at 22.15, because the disco had to move in is an affront to band and audience. However, we were in for a surprise. After singing "Fuck it!" out loud as an answer to the management of Patronaat, we were going to that party. In the lobby the concert was resumed with an acoustic guitar. Cds, albums and t shirts went afterwards like the proverbial baked bread, with a word for everyone (I learned how Nada Surf came to play with Joey Ramone), but that was not all. My friend Johan got his request, as promised, after all the merchandise had changed hands: 'I Am Lighting' and we all were sent off with a homage to Leonard Cohen, 'Bird On A Wire'. Saying goodbye to all the newly made friends from Belgium who had come over because the only show in Belgium was sold out, and found themselves on the guestlist after talking to the band, I went off into the rain wondering how to protect my new, signed LP from it.

You can listen to an acoustic live version of 'I Am Lighting' here: