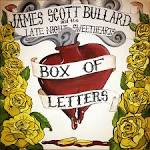 James Scott Bullard is on the same label as Stephanie Fagan, Big Mavis Music, and as avid readers of this blog will recall, the singer-songwriter featured on this blog with her album 'Heart Thief, an interview and her recent EP, '' The March'. She also features on Box of Letters, the mini album under scrutiny at this point in time.

Box Of Letters is an album that sounds familiar immediately. It could have been made anywhere between 1972 and 2016. By now I have dozens and dozens of albums like it and I just don't mind this one extra. Why? There are two reasons that present themselves to me straight away. The first one is that I can hear the honesty in the music and the singing. This is who James Scott Bullard is, the music he excels in, believes in and loves playing. The second reason is even more obvious: his songs are good. So here you go. It may all sound very familiar, whether he touches on country, country rock or a country rock ballad, he and his band touch upon the deeper truths of the music that reaches out to and touches me.

Having been enthusiastic about Stephanie Fagan twice on this blog, I may surprise all with writing that 'Elizabeth' is the song I like less on Box Of Letters. Yes, I like hearing her voice, but the song is the kind of common country song where I usually stop listening. The softly whining pedal steel is too much for me, as is the melody of the song.

Having that off my chest, I can focus on the other songs that I like all. The mid-tempo country rocker 'First Thing On Your Mind' with Rebecca Morning has this delicious lead guitar that does all between The Rolling Stones and The Outlaws. Nice and rough but like a reigned in, wild horse by an excellent rider. Add the warm organ sound and a slide guitar and I'm sold. Not to mention the great oohs and yeah-yeahs going on in the background. This is the sort of country rock that I get out of bed for.

'Another Heart' is more one dimensional than the previous song, but has this change leading up to the, one line, chorus, that packs me in again. The third duet on the album, 'Heartache No More' with Taylor Nealey, again tends to the cleaner side of the fence, but is more alive. A dirty guitar caters the ache, while the organ takes care of the heart. The two voices match in a great way.

If anything Box Of Letters shows that Bullard swings back and forth between the cleaner and the rougher sides of country music. He convinces in both, but I prefer the dirtier side of things and when he steps a bit more out of style with the ballad 'Town Square'. Bullard is able to tap into some heartfelt feelings and shares them with us translated in finest kind of southern music.

You can listen to Box Of Letters here on You Tube: