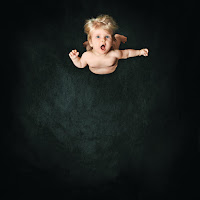 A new album from one of my favourite Canadian bands. Since somewhere in the mid 90s I discovered The Hip through 'Fully Completely' I followed the band through many an album, although I lost track for a few years around 2005. That came all back thanks to a fabulous DVD and a live show I went to soon after that in the 00s.

And now I read that Man Machine Poem may be the band's last due to a fatal illness of its unique singer, Gordon Downie. A thought that makes me sad, as a date with The Tragically Hip meant that we're all still here.

This news makes the album special, but not necessarily good. I can only ascertain that through several listening sessions, but the first round gives me the idea that Man Machine Poem should be alright. It's no 'Up To Here', but than no The Hip album ever was after its first full album, that I got to know as the third one by the band after listening to 'Road Apples' first after 'Fully Completely'. This blueprint of its career is my favourite up to date, which will not change with this album.

Here I hear a few different sort of songs that give the impression that there's rock of old and some newer influences that make the sound more varied. Let me leave it for here and come back after more sessions with the album.

The album opens with 'Man'. We are in experiment territory here where the opening is concerned. After that a lightly touched guitar sets in and a fat sounding drums. A hint of U2 comes by in the playing and singing, but things are so much darker here. This is not a world of hope that we are presented with. "I'm a real machine", sings Gordon Downie. The machine man or the man machine? A view of the future that is not happy. The song does not leave room for a lot of light. The experimental voice points to the man machine.

The darkness does not continue. I have never found The Hip to make happy music, far from. This band is serious and excels in often intricately arranged, but moody indie rock songs. Songs in which the guitars weave in and out of each other and a bass that can be both functional and melodic. Several of these songs come by on Man Machine Poem. Just listen how 'In A World Possessed By The Human Mind' plays itself out. A lot of dynamics that make the song so divers and attractive to listen to. A lot of thought and preparation went into the building of it. Adopting and shedding ideas, to come up with a great mix of all of them.

Not all songs impress like this. A few are more "normal". 'What Blue' is a song that does not stand out. In those cases there is always the typical voice of Downie and a few interesting bursts of a guitar to prick up my ears.

'In Sarnia' is an impressive The Hip ballad. Strangely enough 'In Sarnia' brings Little River Band to mind without all the schmalzy instruments that at times was put on top of its songs. The great and effective guitar solo tops of this beautiful song. It gives the listener a little bit of the uncontrollable temperament that lurks in every man. Those flashes of anger that can weave in and out of a mind within a second. A flash that is usually brought back under control, like this song is.

By then I'm already convinced that Man Machine Poem is an album worthy of The Tragically Hip. Where in the second half of the 90s the band sort of lost itself in ever quieter music and then had to reinvent itself and find where it was good at, in 2016 there is no such doubts left. The Hip adds a few great songs to its oeuvre. The way 'Here, In The Dark' explodes is just fantastic. Without any weird antics, just the dynamics of the instruments and the playing of such; a beast is let loose and reigned in again.

The same quality surrounds 'Great Soul'. A subdued rocker that is allowed to breath and has these dark undertones in the music that simmer through. And then the band starts playing with the inner structure of the song and allows some experiment in its way of working. So fascinating.

I could go on and mention the last four songs as well. I will not. The message is clear. So if Man Machine Poem is to be the end, it is a worthy epilogue to the band's albums. I'm glad to say that I saw the band twice live, both times in excellent form and as a memory have the dvd forever. Like that stack of records I have in the home by one of if not my favourite rockband from Canada.

You can listen to 'In A World Possessed By The Human Mind' here: