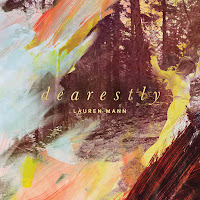 Anyone who followed the postings by Lauren Mann or more accurately by drummer and partner Zoltan, knows that a lot of changes came about in the past three years, since Lauren Mann's previous album was reviewed on this blog. One change that also came about is that "The Fairly Odd Folk" addition behind her name has disappeared. Reading her Bandcamp page it is apparent that there is no longer a band. At least where the recording is concerned. There are so many different collaborators that the conclusion is justified that in 2016 Lauren Mann is totally her own, not on her own though.

Dearestly is the follow up to the artistically successful album 'Over Land And Sea' and signifies a new period in the career of Lauren Mann. One in which social media plays a larger role than ever before. There is a constant reach out to fans asking them to bring the artist and her songs forward in contests, in airplay and all-over conciousness. In the meantime the album, again can be found for free on Noisetrade and Bandcamp. The strangest business model I know for a musician, although this way he/she gets access to email inboxes.

All that aside, it is about the music. In that sense Dearestly does not disappoint. Far from, I'd say. Lauren Mann has found a lighter sound, bringing her songs towards pop, from the somewhat sterner and serious singer-songwriter, piano focused songs of old. Her keyboard overall has moved somewhat to the background replaced by a more total band sound. This makes the album lighter than her previous work, but that would not necessarily please me if the songs didn't work.

Dearestly is a 16 song strong album. Four of those have the title 'Idyll' followed by a number. They function as an intro, interlude and outro. More atmosphere than song. Short atmospheric songs that morph into a sung melody or just a short song, about making a home on an island ('Idyll III'), which is just what Lauren and Zoltan did.

In between the idylls Dearestly flowers until it is fully in bloom. The first full song is a declaration of intent if not independence: 'New Beginning'. Lauren Mann and band are skipping from joy towards this new beginning. The song is so sparkling, happy, almost naive. A song that found a way into my head and is not about to leave it any time soon. This happy mood continues with 'Brave Face'. Lauren Mann has left the singer-songwriter modus operandi and enters the pop arena. Now things are extremely busy there, but not as far as I'm concerned. There just is not much that interests me. What a song like 'Brace Face' does is make me smile. Dearestly finds itself in an almost blank space. Right on, Lauren. A new beginning needs a brave face. It all starts with the one making a new beginning.

The "old" Lauren Mann is found in the piano ballad 'Talk Of Leaving'. Again she shows how well she can build up a song. Her piano is up front here, until the band moves in with very prominent drums. If a calling ocean inspires her so much, it's best she pays serious attention. Electronica blends with the piano in a beautiful way in 'Hybernate'. By the time the chorus sets in, I feel like leafs in the breeze. Swaying to and fro with the violin solo.

By this time I am only half way the album and could continue for another full page, which I will not do. I think you've got the message. Dearestly is pure beauty. It took me a few spins to have the album really open itself for me, but now it has I find myself moved in ways that not many albums do.

If Lauren Mann has not reached her idyll on her island off the British Columbian mainland she hides it very well. Dearestly is a move in another direction, made in a very confident way. Whether there is room enough in the overcrowded pop pantheon, I have no way of telling. What I do know is that I have not heard a more pleasant pure pop album for years and may well be a five star album.