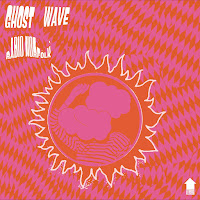 The moment Matthew L. Paul starts singing, the Neil character from the 80s comedy series 'The Young Ones' springs up in my mind. "Oh, wow"! Just like the music does in a less direct way. We're in psych territory alright. The record is lying around for a while and it is about time to write a little about it.

Ghost Wave is another branch of the Flying Nun tree from New Zealand. From Auckland, but the members of Ghost Wave seem to have everything they need to space out. Like the Dutch space band PAUW they tickle my fancy in a pleasant way. Simply because no matter how far out the instrumentation and mix may go, the songs are all right. And that is where music begins and ends with me. If there's no song, I'm usually just not interested. Ghost Wave delivers in that department.

For me the album starts, really starts that is, with the second song. 'Whois Doing The Talkin' starts with a sitar and all sorts of other eastern sounding melodies chiming in. The verse is monotonous, but underneath other instruments are added, making the sound bigger. The chorus is classic The Dandy Warhols of the late 90s and I'm hooked.

The sitar is there for most of the stretch and I'm not a fan of the droning instrument, but when used like here, I can live with it. The keyboard that follows the singing gives 'Blues Signal '79' an eerie quality. Like a ghost following singer Paul without being menacing in any way.

That basically is about all there is to tell about Radio Norfolk. All you need to know. The atmosphere is extremely pleasant in a lazy way. The album is relaxed, like a sunny day. For me it is all the drugs I need every once in a while. Radio Norfolk is not an album I will play every day, but just like PAUW's 'Macrocosm Microcosm' taken in the right doses it is so good. When the tempo goes up in 'All U Do Is Kill', you will find it is in the exactly right moment to make the album more diverse.

By now I know there is something interesting in the water in Auckland, NZ. There's so much interesting and good music coming through to me from that town in the past one and a half years that this is no longer a coincidence. Keep it coming, says,

You can listen to 'All U Do Is Kill' here: