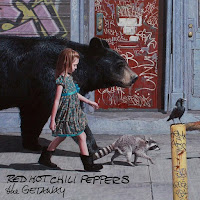 Lately I can't suppress the notion that Red Hot Chili Peppers has become a band that is covered in nostalgia. There are so many big hits by now that every new album is looked at with an amount of weariness. The fans want to hear the hits and not some new song they have no connection with. Still, the first single from The Getaway did get a lot of airplay. It didn't become a hitsingle, but there was no escaping it for a while and I have to say that I like it. At the same time it did not make me very curious to a new album. Has listening to it changed my preconception to The Getaway?

Well, it sort of has. There is a major change though. With the leaving of guitarist John Frusciante the hint of madness that always shone through the music of this band has gone forever. RHCP has become a very normal band now that Josh Klinghoffer has taken on the guitar duties. Another reason could be that the three other members of the band, who are together for over a quarter of a century, have turned into their 50s. Older and wiser. The madness is left for the cover of The Getaway. 'Dark Necessities' or not.

In return we have a band that knows to make an interesting song and present it with a flourish as if we are listening to something special. That when all is said and done, the songs are not, super special that is, is of no consequence. The Getaway may not be special like 'Blood Sugar Sex Magik', 'Californication' or 'Stadium Arcadium' were. It is an album though that keeps my attention for the whole album, something the last two albums mentioned do not. So explain that to me please? Because the more I listen to The Getaway, the more I like it (as a whole).

The album starts in a relaxed mood. The title song starts with this hissing something to be followed by a staccato played funky guitar. The bravoure has left Anthony Kiedis' voice. His singing is still getting better. The slow funk of 'The Getaway' is just what I need it seems. The overdubbed solo guitar notes are sounding like balm to the soul. The bridge attests to songwriting skills acquired through the years. Add the backing vocals of Anna Waronker and there's a song for you.

The first single, 'Dark Necessities', is a fine song, with dark piano notes and again a driving guitar. The slapped bass is Flea at his best. I realise that the music is functional and not effect driven as it was in the past. So here is an explanation for me. 'Dark Necessities' is such a free-flowing song. If anything it shows what RHCP is capable of in 2016. With Klinghoffer in a much more serving role, which opens the music up to all sorts of other instruments in the background. The solo may be slightly reminiscent of 'Dani California', but never derails.

On producing duties was Danger Mouse (Brian Burton). Exit Rick Rubin after 20 years. This has done the band a load of good. The spacious production allows for all sorts subtleties that the band allows in without any resentment. Burton is more like a fifth Pepper than producer as his keyboards are all over the album and is acknowledged as co-writer on five of the songs. But so are Elton John and Bernie Taupin, wtf? In the lazy, funky track 'Sick Love' John plays piano (somewhere). I'm no connoisseur of John's oeuvre, but I suppose that a part of the song was lifted from an Elton John song (and that piano must be very far away in the mix...not found despite a lot of concentration).

By then it is clear to me that RHCP is making music at a deliciously high level. The Getaway is not inching in on quality for one second and is edging itself between my favourite RHCP album, despite the fact that I was about to neglect it after the first listening session. A lesson that giving up to easily is never (well, almost never) a good thing to do. The Getaway is a fine album, that I will be playing for quite a while, not in the least because RHCP dared to renew itself and stopped walking on the beaten track. Well done gentlemen.

You can listen to 'Dark Necessities' here: