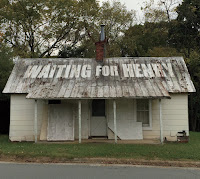 "It's a big decision in a town called Malice". I can dream that song. I read a book called 'A Town Called Alice'. What was it about? I can't remember for the life of me. And now 'Town Called Patience'. Is there a similarity between the two former mentioned titles? Yes, there is and it is familiarity and touching upon well-played strings inside of me.

Waiting For Henry is playing on my Gin Blossoms and The Wallflowers sentiments. It makes me want to get out the debut album of the latter band most of all. Jacob Dylan's breakthrough record. was so nice almost a quarter of a century ago.

Enough of the past. Enter 2016. Hearing the first song only, the strangely titled 'Musconetcong' (it's a river in New Jersey, so I found out), I knew that Waiting For Henry and I were going to be alright. It was that simple. And no, this album is not the best ever made, sorry for being so frank, but bare with me here and certainly not the most original ever in this genre. Too much water has passed under the bridge for that, but Waiting For Henry simply does everything right on Town Called Patience. The way the lead guitar plays in the first bars has everything from The Tragically Hip to southern rock bands of the 70s. And when the singing starts all that fits in a country rock voice presents itself. Gritty emotions from travelling on too many dust roads swigging a moonshine liquor container until the final drops are licked off the lid. In short a bit rough and dirty.

The tempo is pleasant. Nothing too fast, but the kind that allows dancing and swaying, but no one will blame anyone the moment someone is listening in a serious way as so many nice things happen in the guitar driven songs. Layers of guitars make up a song and it's a nice challenge to follow them all while listening. Waiting For Henry is not one for the subtlety department, but does surprise you about the care for details and all these little melodies.

Waiting For Henry is around since 2010 and released it's first record 'Ghosts & Compromise' in 2013. With me in ignorant bliss because of all else I was listening to at the time. Singer, guitarist and writer Doug Slomin, co-writer and guitarist Dave Ashdown, Mike Chun on bass and newby Rob Draghi on drums set out with veteran producer Mitch Easter to catch their alt-Americana in the best way possible. There's no REM in this record as far as I'm concerned. (Well, the guitar (intro) to 'Angel On The Run'.) A lot of other things are present for sure. But as I said it is about touching people and that is what Waiting For Henry does. The 12 song set is well-balanced between the rockers, the rock ballads (of the not Foreigner kind) and hints at country. So all's well in a Town Called Patience.

You can listen to 'Musconetcong' here:

The whole album is available on CD Baby: