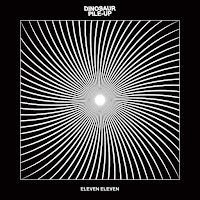 Dinosaurs are the kind of animals that I associate with my son in his infant years, when he was able to name the most fantastic beast replicas with these incredible long names as if he were pointing out the names and numbers of his Matchbox cars, which was my infancy expertise. And now a band with the name Dinosaur Pile-Up comes along, which is the fate of all infant dinosaur collections. One big pile-up before they are given or thrown away.

What music to expect from a band with this name? I had no idea. Judging from the cover it could well be psychedelic. If you move this page and look at the album cover, you'll know why. Angst, as there is some vertigo involved like in the artwork? The first notes put me straight on the right path. Loud rock riffs bounced around, with grunge of the Nirvana variety not far behind.

Eleven Eleven is the band's third album, although the first two albums were recorded by front man and songwriter Matt Bigland on his own. Playing all the instruments. Since this album the band is a trio. Live drummer Mike Sheils and bassplayer Jim Cratchley joined Bigland to create this monster of a sound together. Nothing was left to chance. Tom Dalgety of Royal Blood fame was asked to produce. The result is just what one would expect: loud riffing and loads of energy. That leaves two things to be in place for the album to be of interest to me: the quality of the songs and dynamics.

I often write that a band has Beatlesque influence, a chord change or harmony that is typical of The Beatles. So let me add a variety to this familiar piece of text. Dinosaur Pile-Up regularly presents its listener with a typical Nirvana chord change or guitar solo. Everyone listening to 'Grim Valentine', just to give one example of many possible, instantly knows what I mean. Foo Fighters is not far away either. I have totally no problem with these influences. They are a given to me and from there I notice that the songs on Eleven Eleven are totally on my good side.

When hard rock or grunge are concerned I start liking it if a band manages to incorporate a good melody in the sludge and grinding. If these elements are not there, I stop listening fairly instantly. Matt Bigland offers both elements in abundance. No matter how hard the band hits the instruments there are interesting melodies to follow and choruses to sing along to. The second element is also all over the place. This band knows how to use the effect of dynamics to the max, giving its songs room to breath and the necessary variety. With 'Bad Penny' a great punk rock song enters this mix with some great, dark riffing. I just love this song.

With that all is said and done where Dinosaur Pile-Up's new album is concerned. You know all that there is to know. Loud riffing, melodies and muscles, probably some tattoos, but above all a genuinely good time for all. And let me add pop. Down and below it all this music has that element that makes it appealing for more people than Kurt Cobain t-shirt clad fans only.