Why Are You OK. Band of Horses 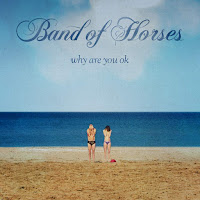 Not so long ago Band of Horses received one of the only negative posts on this blog. Simply because I had already written  some on the album, but the more I listened to it, the more I started to resent the smoothness of the 'Acoustic at the Ryman' album. For once I decided to show my irritation with music, despite the fact that I have a strong conviction that most music is made from the heart and personal emotions. Which makes it hard for me to be negative about it, even if don't like it. Fast forward to 2016 to the new studio album of Band of Horses. Will it fare better?

Why Are You OK opens with this languorously slow song called 'Dull Times/The Moon'. Dull times?, wasn't that at the Ryman? A dangerous start for the Band of Horses, were it not that this slow, lingering song calls Neil Young to mind at his best and slow, with a singer with a far more steady voice. The song goes forward like a small river traversing a flat land. The current slow but sure. And then it hits a small ravine, speeds up, falls of cliffs and becomes unnavigable. That is what happens to 'Dull Times' as it, or so I imagine', moves into 'The Moon'. Two faces to the same song. A great beginning to Why Are You OK

Band of Horses is the band of Ben Bridwell since 2004. Although the band was a beehive of members in its first three years, since 2007 it has a stable line up. Although that I will have heard most of the five albums preceding Why Are You O.K., I never truly found my way into the albums and the songs they contain, not unlike My Morning Jacket that I always start liking but am turned off on after the third song. This all changed with this 2016 album. Bridwell and his fellow musicians touch all the right buttons here.

On Why Are You OK Band of Horses in one way plays a traditional form of country rock that is around since CSN&Y and The Eagles. By unleashing the rock beast a little here and there the songs gain some more depth and originality. The slowish 'Throw My Mess' is a great example of how this works. The drums kick just this little harder giving the solo guitar notes this extra edge that makes the song truly come alive and provides the room for the dreamy The Beach Boys inspired 'Whatever, Wherever'. Soft, acoustic and introspective. We are totally back with the river in the flatlands here.

Acoustic 60 and 70s are all over the album. From a Gordon Lightfoot acoustic guitar, to a typical The Beatles chord change, The Byrds 12 string sound and CSNY singing, it can all and more, be found on Why Are You OK. All meshed into originals that Band of Horses polished so hard that they shine all the way home and beyond. Although Why You Are OK is not a happy sounding album, it makes me feel warm and happy to listen to. 'Barrel House' is one of those songs. It may have been done a million times before, this a such a beautiful song. Laidback and no one trying to break the chain, all at ease in the slow pace that plays out the song. "OOOOOO", Bridwell sings and rightly so.

So in 2016 all's well between Wo. and Band of Horses. I'm not apologising, nor making up for 'Ryman', Why You Are OK is a beautiful album, up with the greater ones in this genre.

You can listen to 'Whatever, Wherever' here: