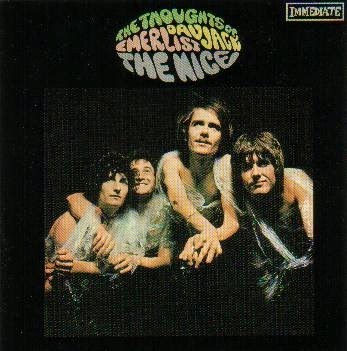 Recently I started a series on albums from 1968 - 1969 of bands that scored a hit single in that period, but that I never heard an album from. This post was preceded by two albums to date, Spooky Two by Spooky Tooth and The Chicago Transit Authority.

The Nice scored one hitsingle in The Netherlands, in the summer and fall of 1968: 'America', the song from the famous musical and film 'West side story'. This hard rocking version made quite and impression on me, but is also, to the best of my knowledge, the only song I ever heard from The Nice. Until today that is.

The Nice started in 1967 as a four piece. Keith Emerson (later ELP) on keyboards, David O'List on guitar, Lee Jackson on bass and vocals and Ian Hague on drums. Hague was soon replaced by Brian Davison. Those paying attention will have found the origins of the strange album title. This debut album was released in 1968 on the Immediate label of then former The Rolling Stones manager Andrew 'Loog' Oldham.

Musically The thoughts of Emerlist Davjack is totally out there. Without listening to this album there would not have been Ekseption in The Netherlands and it is a good question how Deep Purple would have developed without this sound. People argue whether this is the first progrock album. I don't know the answer to that one, but that the music on Emerlist Davjack qualifies for prog is an understatement. There is a distinct classical influence as there is a jazz one. In songs like 'Rondo' and 'War and peace' it is all about long solos around a central melody. In 'Rondo' there is a faint hint of a Dave Bruebeck composition. 'War and peace' has a distinct blues rock theme, until Emerson takes over and pushes his organ into (the) classical (strato)sphere(s). What O'List is doing on his guitar in the other corner of my headset God only knows at times. But rock 'War and peace' does. Hard, loud and wild. Probably live it was even more fun.

There are also songs that seem more traditional on The thoughts of Emerlist Davjack. Especially at the beginning of the album. The title song is a The Move 1967 attempt. While 'Tantalising Maggie' is a psychedelic outing, that is instantly recognisable as a kind of song that has become popular all over again in this decade. Strange noises, phased voices and instruments, but all against a brisk rhythm. A rhythm that is contradicting the total highness suggested by the song itself. By that time there is also a pattern becoming clear: Keith Emerson somewhere in the song takes over and pushes his signature sound, the organ, into the soundscape. 'Dawn' with its sing-song lyrics, is another psychedelic, experimental piece that goes off into many directions. The singing is not exactly very good, but then I had never associated The Nice with singing anyway. Lee Jackson is not the best of singers. All this reminds me of the first Pink Floyd. The influence of Syd Barrett is all over the psychedelic songs on The thoughts of Emerlist Davjack.

'America' originally was not on the album. It is only on later re-issues that the song is added. The song does sum up what The Nice was to me: a basically instrumental band that is able to rock hard with an organ as its central instrument. Good at adapting an existing piece of music into something very much sounding like its own. A view I had to alter. The original compositions may not the best I've ever heard, but on a whole I really like, or should I write "dig", The thoughts of Emerlist Davjack. The additions of 'Azreal (Angel of death)' and 'America' makes the album as a whole even better. And listening to 'America' for the first time since I do not know when another influence pops up. Without the guitar intro of 'America' there is no 'House of the king' by Focus. So that is two Dutch bands who made it beyond our own borders that I'm reminded of. The influence of The Nice is considerable judging from what I'm hearing here for the first time.

It is not surprising that guitarist David O'List was ousted from the band soon after this album. He only took away the spotlight from Keith Emerson. How good The Nice became as a trio within a few years I heard on a live album released much later from a show given at the Fillmore East in December 1969. The Nice rocked hard and all influences shine like they should when a band is extremely good.