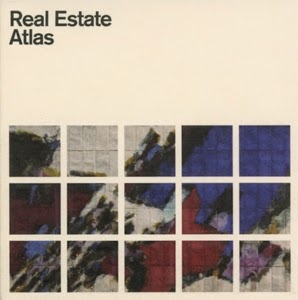 It took me a while before Real Estate's music sank in. I could not really get past 'Days' (2011) and had played 'Atlas' several times to try and find out what all the end-of-year-list talk in the press was about, as I did not hear it. All Atlas did was wanting me to put on 'Rivers and coastlines: The ride', TMGS' masterpiece. When do the horns kick in?, I kept asking myself. The comparison isn't such a strange one. Both Real Estate and TMGS have this utterly dreamy quality in their music. Light sounding guitars, intricate melody lines, soft voiced singing, mostly mellow tempos. And all of a sudden I found my way into Atlas. It happened on a train and the following bike ride. All of a sudden Atlas had me where it wanted me. Listening intently and thoroughly enjoying myself. (Even drove through a red light for the bike section, reading very familiar signals totally wrong.) Following every guitar line, enjoying the clear sound and the mellow mood.

It is hard to explain the change. I can't, really. as not that much has changed. The easy explanation is that I stopped searching for what I did not hear and focussed on what was on offer instead. What I found was beauty. The beauty of songwriting skills and craftsmanship. Real Estate is singer/guitarist Martin Courtney, guitarist Matt Mondanile, bassist Alex Bleeker, drummer Jackson Pollis and the new keyboard player Matt Kallman. The last three create a carpet of sound. The soft drums of which the cymbals are the most defining sound. The soft bass plops in the background, sometimes functional, sometimes purely melodic. The keyboard provides accents or the fabric under the sound. Over this the two guitars play intricate lines, soft toned, clear. It doesn't get much stranger soundwise than the effects in the outro of 'The bend'. Over all this Courtney sings his lyrics. There is little harmonising. Also in spots where it would have embellished songs in a great way. The chorus of 'Crime' really would have been a lot better than it already is with harmony singing. In 'Primitive' it does happen and the wow factor is instantly in place.

Real Estate is referenced to The Feelies all the time. I can't opine on this, not knowing this legendary band of the new wave and beyond era. (I'll catch up, promise.) What I hear is The Byrds, country rock guitar playing in a totally non-country environment. There's a lot of dreaming and shoegazing going on, without the gravelly guitars. There is new wave without the thorny rhythms. There are quite some jangly guitars, but not the rhythm and rock of indie. So where can I put Atlas and Real Estate?

Not all is well on Atlas. The album does sort of trickle to the end. By the time I reach song 8 I am wishing for a little bit of pepper. Real Estate is just too un-dangerous. 'How might I live' comes close to a good old fashioned Dutch tearjerker. Corry & de Rekels would not have minded recording this song. Everyone is allowed to slip up and a second chance as well. ("Without second chances, we'd all be lonely", sings Gregory Alan Isakov. And this wisdom very much rings true)

As a whole Atlas is just a little to neat for me, but when I'm in the right mood the beauty of this album reaches me and is truly appreciated. Real Estate clearly has a vision on the sort of music it wants to make and succeeds in doing so. No, Atlas is not end of year material as far as I'm concerned, but worth a review. Something that I wasn't planning on writing just a few days ago.

You can listen to 'Talking backwards' here.
Gepost door Wo. op 09:20