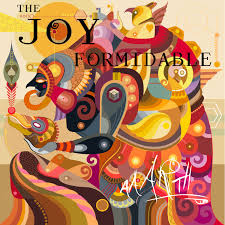 Some albums simply seem to want to put the unsuspecting listener on the wrong foot. If I had anything to go on it was the idea that I was going to listen to a mash up dance album by The Joy Formidable that I certainly was not going to like. In fact I had stopped listening after a few seconds. It wasn't until the album came by digitally that I got passed that strange dance, rock, metal hybrid calle 'Y Bluen Eira'. My ears all over the place bleeding. Next to that I read the title as 'Aaaarrrrgghh'. A fitting title alright, I thought.

Aaarrghh turned out to be Aaarth, The Joy Formidable a band from Wales that plays a form of indie rock that I just for reference could compare to Anna Calvi with even louder eruptions and some psychedelic edges or Wolf Alice. Band of Skulls is another good example and let me put in Blood Red Shoes as well.

The band is fronted by singer-songwriter and guitarist Ritzy Bryan with Rhydian Dafydd on bass and Matt Thomas on drums. As eclectic as the artwork is, as eclectic the music. This band is not afraid to show different sides of itself. The opening song attests to this, but also a song like 'All In All'. It starts out ever so soft, modest. Slowly but surely the tension is built up to end in a guitar shredding part that A Place to Bury Strangers would play on a lazy, sunny afternoon. Live it will be earsplitting, undoubtedly.

The Joy Formidable plays with the emotions of its listeners by throwing in a mood or two or three. Alternative rock is what is upheld most. The band knows how to play with dynamics in its songs, making sure that the listener is always on his toes. In that the band fully uses all electronic equipment at its disposal. Layers of guitars are heaped on each other. All sorts of effects come by, including Muse like guitar antics in 'The Better Me. The voice of Ritzi Bryan gets some treatments or at a minimum a nice bathroom echo. Where Dafydd sings along the Band of Skulls comparison comes in closest. At its loudest the band comes close to metal. Headbanging is certainly allowed.

The contrast with the piano intro of 'Absence' is so huge. Nearly incomprehensible. Until Bryan starts singing and draws me into the song directly. Is this the same singer? Singing so softly, even dreamlike in the harmonies, it seems like someone else entirely. Again The Joy Formidable surprises me, utterly.

With Aaarth The Joy Formidable has delivered an intriguing, but above all good album. The diversity and dynamics add to the sense of overall quality. How the trio is ever to reproduce all this successfully live, I can't tell, but for you to find out. And the dancing part? Certainly allowed, I'm sure.

You can listen to and buy Aaarth here: