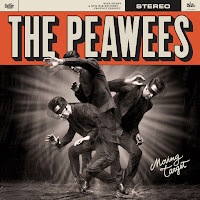 The 60s are back judging from the cover of Moving Targets. Crooks from the tv series of Batman from a time when it was enough just to cover the eyes or just copying ZZ & de Maskers? 50 Years down the line The Peawees show us its love for the music of the time in a way that it could not have sounded ever then. A rough voice, enthusiastically played guitars and golden melodies. It sums up The Peawees nicely.

This is a band in a long line of bands that came by over the past years on this blog. One of the first ever that came to my attention were The Loved Ones from Los Angeles. Somewhere in the early to mid 90s. Young men who were proud that they would play with Dutch 60s icon Wally Tax the next evening in Amsterdam. Tax is long dead, The Loved Ones even longer no band any more.

The Kik, The Stangs, The Black Marble Selection, just to mention a few bands from this country who totally dote on music from the 60s. Let me forego on all the psychedelic bands here as The Peawees don't do that 60s. They more or less stop in 1966 when substances and sitars entered pop music. Moving Targets is about spruced up rock and roll The Rolling Stones, Small Faces, Pretty Things, the early The Kinks, Golden Earrings, The Outsiders and Q 65 were playing at the time and scoring huge hits with.

It's this atmosphere of energy and progress, the mood of rebellion curbed in drum beats and dancing that The Peawees catch expertly. The 60s was a pivotal point in history and all signals tell me that we are at a new crossroad in history. This music comes right in time for those into it. The masses alas are not, but have found their way to illegal substances to and relentless beats of another kind.

Some albums are as U.S. as they come. The Peawees are Italian though, from the town of La Spezia on a bay off the Thyrranian Sea, a town I passed on route to meet another great Italian band called Bongley Dead in Ponte Buggianese in the summer 2017. (Read on here: http://wonomagazine.blogspot.com/2017/08/meeting-with-bongley-dead.html) Nothing prepared me for this information, but then why not? Music is universal. The Peawees are around even for 20 years and toured with many great (punk)rock names over the years.

So, a surprise. The music is not though. The guitars play the right sound, the right tempo. The piano plays Johnny Johnson style. An organ warms things up in the background. The strong beat is accentuated by nice handclaps. In short Moving Target holds everything that constitutes a great rock and roll record. When the volume is lowered, enter a great pop song like 'Justified'. All things more in the background in the other songs come forward here. A Fender Rhodes, a Hammond and the bass and drums. There are even modest harmony vocals. This is the kind of song I love to hear from my 60s favourites.

This bunch of energy caught on cd is everything I like about this music. Deliciously fantastic. The Peawees, Moving Target: Spread the word.

You can listen to and buy Moving Target here: