The Weight Of The Sun. Modern Studies 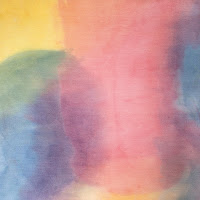 I can't say I have ever seen such a vague album cover. The water colours do not give away anything about what could go on inside. At first they do though. Let me take you on a little trip and talk you through my experience with The Weight Of The Sun. In a way this symbolises the music on the new album of Modern Studies. The music at first may sound vague as well, until you start listening in a serious way that is.

The details of The Weight Of The Sun divulge a far more solid basis than a first listen gives away. The album has an enormous density from which sounds do not easily escape. It appears to be a whole, massive. This starts with singing that is light and dark. Emily Scott and Rob St. John sing everything together, which creates a uniformity. Until the details siphon through that whole.

An image that presented itself to me was former Prime Minister Theresa May dancing in Africa. The Weight Of The Sun is so totally stiff upper lip British. No emotions, no joy are allowed to show. Except that it isn't correct. Modern Studies may be a study in self-restraint, once past that point it fails to do so. So why all these words?

Simply because The Weight Of The Sun is a great album. Modern Studies and its members entered my life with the album from 2016, 'Swell To Great', followed by 'Welcome Strangers' in 2018. 'Swell To Great' at first seemed more like a project to me, created around the find of an old pump organ. The organ is retired, at least on record, the band continued with an even better album. At a minimum that level is continued in 2020.

The folk music that is at the heart of Modern Studies is infused with some dreamy pop music, always spiked by Pete Harvey and Joe Smillie. The rhythm section does not necessarily have to hold back in the songs, like in 'Heavy Water', where there are even extremely poppy ah-ah-ahs near the end, giving the song an even larger pop infusion. I haven't done so yet, but soon will play the album louder and see what happens. My guess is the album will come alive even more. There are many details to explore that will come forward either by playing it louder or on a headset. Don't get me wrong, as I liked the album immediately, but first impressions can be very wrong and lead to images that do not correspond with what is on offer.

Modern Studies does not restrain itself in any way. It is the singing that gives the wrong impression. The singing is serious, somewhat downcast and without expressions of (deep) emotions. Listen behind the vocal delivery and a world opens itself. Listen behind the lead vocal and a world opens itself in the harmonies and little fun things here and there. The band certainly experiments with sounds, instruments and delivery. There is no comparison with its first album. All is well beyond the music there, now the organ is out of the way. The result is an album filled with, yes, serious songs but also rich in melody and arrangements. I can listen to it for hours on end without a problem.

All this comes together in the subtly rocking 'The Blue Of Distance'. A perfect song to my ears. In other words this is one of the albums released so far this year that really make a difference. Subtle, diverse, rich, lush and soothing. Big words for an, at first, heavy sounding album, but then what could I expect when an album is called The Weight Of The Sun?

You can listen to and buy The Wight Of The Sun here: