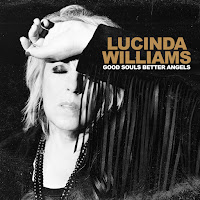 It was a while since I heard a new album by Lucinda Williams. Somehow she dropped off of my radar somewhere around 2010. It seemed I had heard enough music by her. A few days ago I read Erwin Zijleman's review of Ms. Williams' latest album on his own blog and pricked up my ears immediately. After listening to it once I decided to buy the album on vinyl and right now it is making noise in the home.

"Lucinda Williams is angry", Erwin wrote. I do not know about that. No one is angry all the time (I hope for her). It is for certain that bad news inspired her. Good Souls Better Angels opens with the song 'Bad News Blues' and it rather sets the tone of this album. One thing is very certain, beauty is not what Lucinda Williams had in mind when starting this album. Nothings is made prettier than it is. Her voice, a little worse for wear, obviously has seen dust and gravel, hard liquor and cigarettes. It's rough and exactly what these songs need. The music matches her. A distorted guitar or two and a bare bass and drums. Except for an odd organ in a couple of songs this is all we get. And it is enough.

Listening to the guitar eruption, e.g. in 'Man Without A Soul', I am reminded of a dog on a leash. The kind that is on a leash because it will bite if released and not the kind barking in the middle of the road, to walk away when approached anyway. It makes Good Souls Better Angels a dangerous album. There's simply no intention to please here. And that makes that it does anyway. In an extremely pleasant and good way. Having listened to the album a few times, it is not hard to conclude that it is Lucinda Williams' best to date.

To state that for 100% certain I will have to wait a while longer. Play it more often. But something tells me I may be right. How come? My theory is that nothing got in between her initial emotions and the end result. No producer has tried to make the songs more beautiful, tried to get violins, organs, harmonies and what have you into the songs. What I hear are the bare emotions of Lucinda Williams accompanied by a bare band. Producers, Tom Overby, Ray Kennedy and Ms. Williams herself, have resisted to adorn the songs with things they do not need. The result is a rough album that impresses from the very first note to the last one of the five demo's that came as an extra on side four of the double album.

Like my favourite Spanish singer, Pau Dones of Jarabe de Palo, Lucinda Williams' voice can become a little whining or flat-sounding. I notice that this hardly happens anywhere on Good Souls Better Angels. So there's my second reason for liking this album better.

That's all nice and well. It starts with the songs themselves of course and most of the songs on the album are simply good to extremely good. That Trump is lambasted verbally in 'Man Without A Soul' is a nice to know but not worth much if the song isn't good. And it it is. "I'm gonna pray the devil back to hell", is an inspired piece of lyric. If that works I do not mind praying a certain someone back to his tower in NYC. Listen closely and you'll find more touches of inspiration. Lucinda Williams is on a mission it seems and it shows in her songs.

So, yes, the principle emotions behind this album may have inspired her to give it her utmost. And it worked. This is a must have album.