Among The Faceless Crowd. Ben Bostick 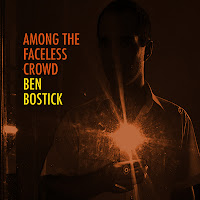 This is going to be a review of little words. Simply because Among The Faceless Crowd is an album that does not set itself apart in any great way. There's no grandstanding, no ultra flashy bits, no nothing. Hold on though, this is meant in a positive way.

Ben Bostick presents himself just who he is, an Americana & country singer who is able to present nice songs that sort of do everything right. Among The Faceless Crowd is the kind of album I want to listen to when I have no need to be challenged, for when the day is done. An album that I only have to listen to and let myself be carried away by songs that go from a to b.

Quite a difference from his previous, second, album, 'Hellfire'. This was a rocking album, where Bostick did not hold back. This album started after he moved with his family from L.A. to Georgia. He started out on his own, playing everything until the point he needed other instruments. The result is an album with singer-songwriter folky songs that are pleasant. As I wrote, quite a step from 'Hellfire'.

So if you are attracted by a singer with lightly rough voice playing soft songs, some just with his guitar, others with a band setting including a warm organ and an electric guitar, Among The Faceless Crowd is your album.

You can listen to and buy Among The Faceless Crowd here: