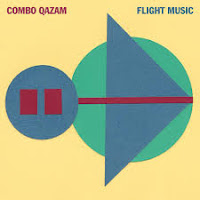 Combo Qazam, for 50% it is an incredibly old-fashioned name -who even knows what a combo is in 2020?- works with complex rhythms but knows how to find the right melody to go with it. Its music is not necessarily a showcase of complexity, it serves a purpose and that is to entertain. Several songs are extremely danceable. Take 'Owls'. The rhythm propulses all limbs into movement.

Combo Qazam is a new band by old hands who have all made music in various bands, several of which are also released by the Tiny Room Records label. Ab al Tamimi, Gino Miniutti, Arno and Stefan Breuer have teamed up and soar to great heights together. The Brewiss brothers may be ahead by many records, as a band, Combo Qazam is close behind Filed Music with its first record. Having to chose between the records of 2020, I have not made up my mind yet, saying a lot about how good Flight Music is.

The music on the album has elements of experimental rock within it (and reading the bio, krautorck, but I have no clue what that is, still having to catch up) but there certainly are prog elements as well. The band does not spin out its motifs for a quarter or more. Why bother if you can do the exploration in 30 seconds within a song also? The funny thing is that all the influences Combo Qazam mentions in its bio either are no favourites of mine or totally unknowns for me. So it must be a small wonder that I like the album so much. Even small wonders need to be treasured. That is what I'm doing once again right now.

To give an example of why I like the album. 'Waveforms' starts with a rhythm that is not your every day's rhythm. It gives the song a stop start feel that is kind of sluggish. The bass and guitars find their way in between the rhythm, while the lead guitar stresses the stop-starts. The vocals over the whole are dreamy, softly floating. The melody is not so much brilliant. It is utterly mesmerising. The rock interludes give the song a counter weight, resulting in the light and the shade that is important for rock songs to have. Finally a guitar or three shoot off into the stratosphere playing the song towards a sonically violent end. The result is an extremely fascinating and good song, showing several sides to the composition.

This is just one example of the many things going on on Flight Music. Nearly each song has surprises like these within it. Yes, the music is challenging. Anyone expecting a pop song starting at A and drive directly to B is at the wrong address. People who like the scenic route in music, including a detour, will find many interesting vistas along the way. Combo Qazam is technically proficient and able to write songs that make listening to proficiency worthwhile. An album to invest time and money into.

You can buy Flight Music here: