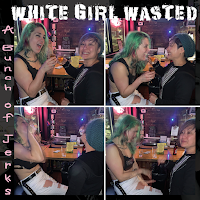 It seems like our Wo. is enjoying himself with singles these days. We present his choices of this week.

White Girl Wasted. A Bunch of Jerks
White Girl Waisted is the single of a maxi single. The song is rough, elementary. Sparsely played guitar, bass and dry, dry drums. Over it the singing is a sneer, like songs were sung in the punk era of the second half of the 70s. The playing is a match. Except for a pick flying over the bass snare of the guitar, creating that dirty sound, there's no embellishment on White Girl Waisted. Except the harmony call-response singing between Stabby and her male companions. What you hear is what you get with A Bunch of Jerks. Nothing more but certainly nothing less. It may be retro but can certainly match the bands from the days of old. 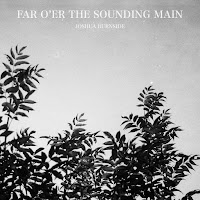 Far O'ver The Sounding Main. Joshua Burnside
Far O'ver The Sounding Main is not a single but a five song mini album. I have decided to give it a place in this collection. This is very traditional music. Burnside is from Northern Ireland and appears to sing classics from long ago. His voice is simply just right for this kind of traditional folk song. 'Lambs On The Green Hill', the opening song, starts off with just a vocal, to slowly but surely become a full band song, filled with traditional sounding instruments. Violin, banjo and what have you. Serious, sad, usually ending rather dismal.

On the mini album Joshua Burnside does sing traditional folk songs in a traditional way. It is not something I would play regularly, but when done right they do find their way to me. Like Burnside does. His voice has that nice rough layer and a hint of ingrained sadness begotten due to years of suffering in this earthly valley of tears. The lone banjo sound, as if deserted by love and life itself, adds a touch of forlorn longing to an instrumental song like 'Kitty May'. It immediately floors me.

On first listen I had my doubts but Joshua Burnside has taken them away totally. Far O'ver The Sounding Main holds five songs that immediately touch, given half the chance. I have given it and they did.

This Love Is Better For You. Apneu
Quite the statement the title of Apneu's new single. Full of confidence, but also uncertainty about the outcome. Why state this if you have the Francesca being sung to already convinced? Wisdom comes with the years, they say. And people sometimes make other, even wrong choices.

Musically there's no doubt though. Apneu is rocking out, like I remember from the Howrah album launch support show they played a few years back. For me the introduction to Apneu. This pleasure is continued with This Love Is Better For You.

The single starts with a loud guitar, screaming out, before a voice sings over it. Live it will be so loud. Bass and drums kick in, making the song extremely tight, as if the guitar and voice are reigned in. There's a mould to fit into. The song moves from the more mystical to a real world alternative rock song. From that moment on more guitars enter the song. The prime source guitar is there but mixed more in the middle ground. All sort of overdubs fly in and out. And then the first guitar drops away, opening up the song, to be replaced by a riff that is played several times.

Yes, Apneu is rocking in a wild and in a restraint way showing two different sides of itself in one song. Promising and good. There's more to come in late summer. 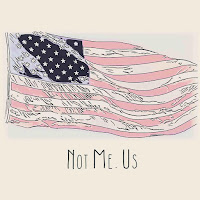 Not Me. Us. Ethan Gold
The attraction of Not Me. Us is the change from a balladry kind of song to a full fledge pop gospel outing. Ethan Gold is an artist I had never heard of when his single was dropped on my digital doorstep. I liked the beginning immediately. It is soft-spoken, almost timid, but so nice. Ethan Gold has a nice, somewhat limited voice with a warm timbre. His tone of voice sounds like all giving. The L.A. based singer is the embodiment of warmth on his new single.

In the chorus something changes slowly and by the time we reach the second chorus I get the same experience that 'Lay Down' by Melanie & the Edwin Hawkins Singers gave me as a child a long time ago. More and more happens, until the whole chorus is toned down to the choir solo, bringing the song to a soft ending. 'Lay Down' was a huge hit. Nowadays impossible to achieve with a song like Not Me. Us. Nevertheless it is a must hear. 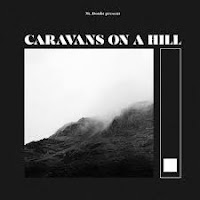 Caravan on the hill. Mt. Doubt
A tweet by the band Garlands put me on the trail of Mt. Doubt, another band from Glasgow. A new name for me, but not for others. Caravan On The Hill is an extremely mysterious song. Like the mountain top in the mist. Too dangerous to continue the climb. Extremely comfortable to listen to in a safe chair at home.

Further on in the song the wind starts blowing into the song, dispersing the mist. It doesn't become clear, far from, as the mystery remains a part of the song. It is the attraction of the song as far as I'm concerned. The singer calls out, the harmonies behind are clearer, as if calling out to him. The sound is dark, murky, in part. The sound is a whole and not individual parts, as the faint shape of the mountain trying to get through the mist.

Listening more closely gives away some of the secrets. Caravans On A Hill is a special song. In fact it ought to get radio play and become better known fast. Many people will enjoy it if they got the chance to get familiar with it. A beautiful song. 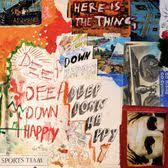 Going Soft. Sports Team
Word is, Sports Team is the new thing in alternative rock. The album has been pushed back due to the Corona crisis, this single was already out, so lets take a listen and share my thoughts with you.

It starts fairly relaxed for a few beats, before a gravelly guitar joins just to the right of 'Psycho Candy', so still guitar and not drill. In Going Soft 40 years of new wave, alternative rock and garage rock come together. The singing can only come from the U.K. The voice is rough and cocky. The lead guitars hold no bars. The riff is slightly familiar as it could be from The Jam to Oasis and back. The rhythm section and the guitar sound is straight the Strokes on its only album that matters.

All together it is the right mix. There's no way I can call this pop music. Sports Team steers away from pop by a mile or 2 at least. At the same time try not to song along to the chorus and suppress a smile at that little riff following it. It is all catchy as hell.

What shines through is energy and urgency. Sports Team is a band with a mission. With the energy bouncing from Going Soft and B-side 'Here's The Thing', these songs are nothing but a great promise of more to come. It's five more weeks before there's a whole album, but if that promise is fulfilled, the debut album is going to be stellar. After Sorry's '925' the second great debut of 2020? 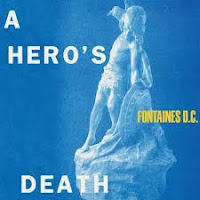 A Hero's Death. Fontaines D.C.
Fontaines D.C. last year was one of the darlings of the indie press. Regularly I can agree with them, but I decided to stick with Shame first and then the Murder Capital instead. I did not really like 'Dogrel' and that had to do in part with the voice of Fontaines D.C.'s singer.

So already in 2020 a new single. There will even be a second album this year. That is a surprise as most bands with a new album have to tour and tour until the first album is milked fully and totally before a washed-up band has to come up with a new album, instead of developing itself musically as well and not just as live players.

Fontaines D.C. has decided to follow the path of musical development, despite playing a lot . A Hero's Death is a powerful song. There is so much energy coming from the song. It starts with just drumming for 09 seconds. It already gives the song a major boost. It is 38 seconds before "Life ain't always empty" is sung and repeated for 20 seconds. So only after 58 seconds the song really starts. Nothing changes, it is just the same chords going down and then up to slide down again. So in that sense A Hero's Death is not a spectacular song, but within its limitations it does everything right it seems. This is energy spent in the right way. I even like the "pa-pa-pa-pa's". Yes, a great single.