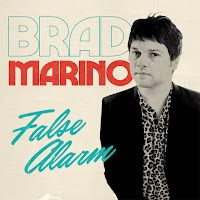 Would Brad Marino have been happier had he been born earlier, by a few decades? The down side is that he would be much older now of course. On the other hand he would have found a bigger audience for his songs. Just imagine the Marino originals on this mini album between hits of the late 70s. They would have looked fab between 'Hanging On The Telephone' and 'What I like About You'.

In other words my question can't be answered, just mused about some. Fact is that Brad Marino musically loves an era that has gone for good. An era I lived through as a youngster. In fact I like it a lot better now than I did then. And having someone like Brad Marino delivering new songs in the genre this good is an icing on my own personal cake.

Last year his first solo outing, 'Extra Credit', already went down well with me. With False Alarm some more boxes get ticked in the right way. False Alarm is at heart a three song single, with a digital 5 songs extension. The title song has already featured on this blog as it was the first digital single of the album. So I just refer you there: http://wonomagazine.blogspot.com/2020/04/6-singles.html.

With 'At Night' the new songs kick off. It starts with a Beatlesque psychedelic opening. Straight away the song itself kicks in, loud. Fast paced, strongly played with no frill in sight. A tight rhythm section goes for it, rhythm guitars seal up the song and the lead guitar is allowed to sail off the coating. If there are frills it is the harmonies Brad Marino creates around and behind his vocals. The song ends as psychedelic as it started. Just this little loose end that is no part of the song. Just an idea that floated around on an instrument hanging around somewhere.

'What's My Scene?' is another extremely strong song. In fact the pop level of 'What's My Scene'?  is much higher than The Romantics' and The Knacks' best songs. The original version by Hoodoo Gurus is sort of obliterated by Brad Marino, but of course a nice song. It starts with Marino being the much better singer. Also the guitar work is much more pronounced. Something that perhaps in 1987, among the worst years in rock, was impossible to come up with. Other music ruled. Marino knows no inhibitions here and rips the song up in grand style. All in all this is my favourite song of the album. It rocks so extremely nice. Permit me to write that this is my scene!

In general the influences of Brad Marino are much wider than just powerpop/rock. The dirty Rolling Stones of the early 1970s and the rock and roll of Chuck Berry are easily discernable. For example in some of the solo's Marino plays. They have a high rock and roll feel, like Keith and Mick Taylor were influenced by. So it is not just the 'Peggy Sue Got Married' Buddy Holly cover that ends False Alarm giving his influence away.

From there on there're five more songs that keep the party pumping into the late hours. Nothing is a false alarm on this album. It rocks, it rocks harder and then some more to become the hardest. False Alarm swings. I can imagine it being so much fun, not to say satisfying, when Brad Marino has finished writing and recording a new song, knowing to his inner core that he's nailed it again. False Alarm is an album that all lovers of retro powerrock must get acquainted with. Not doing so means losing out on the biggest of musical parties alright.

You can order False Alarm here: