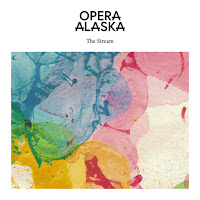 Moss featured on these pages, including the former magazine, from the very beginning of the band. Five albums, several live shows passed by and always positive in various gradations.

The band has been in peril in the previous decade but returned with the album 'Strike'. Come 2020 Marien Dorleijn does come with an album by a new band/project called Opera Alaska. Together with jazz guitarist Marzio Scholten and drummer Lisa Ann Jonker Dorleijn created an extremely dreamy album. The Stream is an album full of guitar and keyboard sounds, where some digital effects were not shunned. Underneath inventive or accompanying rhythms are played by Jonker, serving the songs or being prominent like in the instrumental, slightly experimental 'Strength'.

It is surprising turns like 'Strength' that give Opera Alaska some more mystique than it already holds within it. Yes, Dorleijn's soft voice is unmistakeable, for the rest he has come up with a different album than Moss would have produced. Dorleijn and Scholten worked on songs in short, effective sessions. What we hear is basically what was recorded in those sessions. There was not much need for overdubs and other extra's. Often, when demo's are released at a later stage, it is possible to hear the need for further work, not on Opera Alaska. There are finalised songs on the album that have a dreamy quality, partly longing, partly beyond reach. Influences are certainly in the CSN(&Y) corner of music, but not exclusively. Soft indie-pop-rock like Teenage Fanclub produced in the 90s can be found here as well.

For a collaboration between an indie rock guitarist/singer and a jazz guitarist, the music is, surprisingly, pop/rock oriented. What is present is some exquisite guitar playing. Little riffs and larger melodic runs that sound very nice.

On the whole The Stream is a dark album. Marleijn sounds dark and has decided to leave his ability to sing in his higher register at home in several songs. This is joined with darker sounds on the synths, that are on the album, and the guitars. Of course this does fall in nicely with a lot of Moss songs. The question I can not answer is whether it would have been impossible for Dorleijn to make this album with Moss. My best guess is no, it isn't. On the whole The Stream is a bit more experimental and that may be it. The quality is certainly on par with my favourite albums of the band.

The second difference may be that The Stream is more electronic. Synths play a certain role, where Scholten's contributions are acoustic West Coast 70s influenced but also progrock, let's call it Marillion, influenced. Contributions that make the album very varied in sound despite the sometimes rather glum mood. I definitely cannot answer the question whether Marzio Scholten could have made an album like this. I am not familiar with his jazz work so have no way of telling.

To sum up, the collaboration Opera Alaska is, has led to a beautiful album that combines the voice and a little of the sound of Moss with a totally different world that goes far behind the indie rock of Marien Dorleijn's main vehicle. It may be worthwhile to consider blending the two in the future. Didn't Robert Palmer already sing it in the late seventies: "The best of both worlds, double fun".

As a final comment, the intro of 'Strength' brought a totally failed cd to mind by a singer-songwriter playing ever so nice singer-songwriter songs with his acoustic guitar. His solo cd on sale that evening contains nothing but songs like the beginning of 'Strength'. For the life of me I can't remember the name of the guy. Totally blocked it. Not so for 'Strength', the most experimental, instrumental, song on The Stream. After the intro the whole slowly becomes a song.

You can buy The Stream here: