Osmosis. I Am Oak 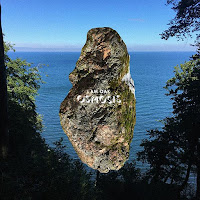 My first comment has to be on the artwork. What a beautiful picture. Serene, tranquil, but also as if I'm looking at something that is not possible. Like a Roger Dean painting on a Yes album of old, but then for real ... or not? A floating piece of rock. The light and the shade are perfectly caught here. It does make a promise for the Osmosis though. Is it fulfilled?

Osmosis does come with a warning from me. I Am Oak has the tendency to disappear within itself. The music and singing can become so soft and modest that it vanishes from my consciousness when I play the band's albums too soft. It just seems to truly disappear.

To prevent that from happening Osmosis is played fairly loud at this moment, an advice I wholeheartedly present to you. Whole layers appear, in fact, Osmosis may be the loudest I Am Oak album to date. The singles preceding the album already hinted to this fact. Something I was quite happy with. In my opinion I Am Oak is a band deserving to be heard.

I Am Oak is a band I slowly grew into. The first impression was simply 'nothing'. Thijs Kuijken's voice is soft, lingering, hovering somewhere outside of my earshot it seemed, the music close to not existing. And yet the band caught me somewhere along the way. The subtleness of the music crept up on me and under my skin.

Over the past months several singles were released by I Am Oak that hinted at a change of course. Where accents in the music were either non-existent or barely noticeable in these songs they are firm and up front. This mood was brought to Osmosis. Wikipedia tells me that Osmosis "is the spontaneous net movement of solvent molecules through a selectively permeable membrane into a region of higher solute concentration, in the direction that tends to equalize the solute concentrations on the two sides". I'm afraid this doesn't help me understand what Osmosis is about. The "higher ... concentration" part of the definition resonates in the music though. By offering certain focus points in the music several songs on Osmosis become more concentrated and much less fleeting than I Am Oak's standard songs.

Let's look at a few examples. The album opens with piano chords over which Thijs Kuijken starts singing. Mixed up front in the mix, he is in the lead. That it is until a slightly distorted guitar, as Mike Oldfield introduces such a sound on his 'Tubular Bells' album, kicks the song in the butt. Slowly 'The Shore' fleshes out with bass, drums, organ and background vocals. The song as a whole is solid, the guitar tops it fully off. And yet, when I play it too soft, also 'The Shore' disappears fully from my attention. It is when I play it louder that the production comes to a full bloom. The sound clear, the instruments all distinct parts of the whole. Oh, yes, Osmosis has grabbed me by the lapels and holds on, but only because I persevered after the first, soft listening session.

The familiar sound of 'Between Worlds' kick in next and I'm so happy. This was the song I hoped before the summer would be I Am Oak's standard for the new album. This is beauty incarnated. The slow piano notes in the interlude touch me deeply. They are nothing more than a few notes and every single one is just right. In combination with the lead guitar it becomes musical heaven. And that standard? Hope fulfilled.

I notice that on Osmosis I Am Oak mixes a little jazz into its mix, not unlike West Coast acts from the late 70s and early 80s did. The Doobie Brothers, Christopher Cross, et al. 'Hidden Coast' holds a few elements that I heard at the time. Again a few elements are allowed to stand out. The guitar, a synth, the drums are soft, yet pronounced.

Moving on through the album it slowly dawns on me that the Osmosis part in the music of I Am Oak agrees with me. The concentration of the accents in the music lays the beauty in that music, that for sure has always been there, bare in a new and exiting way. What was hidden is revealed, what was (near) absent introduced, what was veiled, unveiled. In a way it seems to me that I Am Oak and more specifically Thijs Kuijken, presents a new level of self-assuredness, a new way of expressing itself/himself. It certainly agrees with me. It may be too early to really tell, but my guess is Osmosis is I Am Oak's best album to date.

You can listen to and buy Osmosis here: