Why Me? Why Not. Liam Gallagher 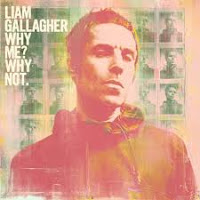 'Rock And Roll Star' was a game changer. If this song had been the only Oasis song ever, it would have been enough. I could have lived with it. 'Shockwave' is not such a game changer. It can't be from this singer. The intention is clearly meant to have the same effect.

The shocking thing is that 'Shockwave' is so close to plagiarism that I can't help but wonder that nobody noticed. Whole parts of the verses is the chorus of Black Rebel Motorcycle Club's 'Spread Your Love'. In short an extremely strong song that kicks off Why Me? Why Not. like a storm. The rest is for lawyers should it come to that.

Liam Gallagher's solo career is doing nicely it seems. After the fairly nice 'As You Were', the youngest Gallagher brother returns with an even stronger album where he emulates with his old band here and there; he is the voice so why not?, but also puts his own accents in the right places. Working with different producers/co-writers did Liam a wealth of good. I am inclined to write that Why Me? Why Not. is better than Noel's latest solo effort. Especially because Liam finds the nuance in several songs and excels in mid-tempo violin laden ballad rockers and true rockers. In fact he has found his old voice again, full of arrogance and brawniness.

Of course I am still in the stage of getting myself truly acquainted with the album, the fact that the LP is already in the home tells something of my first impressions. (In fact I was the first to buy it last Friday at my local retailer, so went home with the only bag, ha!) One of the things I noticed immediately is that slacker lazy Liam, who always says in interviews he'll quite music if a record is not successful, is working here with an urgency I haven't heard in any of Beady Eye's nor his solo record. Not speak of at least some of the last set of Oasis albums. He even seems to be having real fun with these songs. Just listen to the rock and roll banging piano in 'Halo'. This is a stellar song. In fact a song that would have fitted perfectly on either of Oasis' first albums. It is a long time ago that I dared comparing a release by the band and solo efforts to 'Definitely Maybe' or 'What's The Story (Morning Glory)'. Things never became that good again. And then here's Why Me? Why Not.

No, let's not overdo it, let's not. Certainly not. But I can't help myself, I just really like Liam's LP. There's so much happening. Of course, he ought to write a check to his brother, not to mention BRMC, John Lennon's and George Harrison's ('Meadow') ghosts are hovering over parts of the album, but who cares. The result is an album that matters. Greg Kurstin, Simon Aldred, Adam Noble and especially Andrew Wyatt have given Liam Gallagher that little extra. He even co-wrote two songs with Jeff Buckley's guitarist, Michael Tighe. It is that extra that puts him on top. Apparently 'As You Were' outsold the rest of the top 10 when it entered the English charts as number one two years ago. This album should outsell the whole list as it is so much better.

As I wrote, the real verdict will come later. The first impression is abundantly clear. Let's Rock some more, to quote the title of that other fine album released this year.